Iligan Cement Employees Cooperative Credit Union Inc. (ICECCUI) was organized through the leadership of Mr. Wilfredo Bartilad, in August 1979. It was registered with the Regional Cooperative Development Assistance Office (RCDAO) under Reg. No. XII-0I0 with an initial fixed capital generated from the members and inclusion of TEN THOUSAND PESOS (PHP 10,000.00) grant from Mr. Tomas I. Alcantara, President of Iligan Cement Corporation. After 2 months, the ILIGAN CEMENT CONSUMERS COOPERATIVE INC. (ICCCI) was formed, in order to cater to the basic needs of the members through its canteen services; it was registered with the Bureau of Agricultural Cooperatives Development (BACOD) under Reg. No. R-XII-F7-007.

The newly formed cooperative, Iligan Cement Multi-Purpose Cooperative was registered on September 6, 1993, with the Cooperative Development Authority (CDA) under Reg. No. 0893-C-KEO with total assets of PHP 6,526,288.00. To enable the cooperative to engage in business with other economic activities such as credit and savings, canteen operations with a convenient store, it was decided by the members to amend their charter to become a multi-purpose cooperative.

In the year 2001, the cooperative ventured into labor services by becoming the labor service provider of Iligan Cement Corporation during the latter’s shutdown activities and subsequently on its project need-based requirement of the plant.  The said activities helped increase the cooperative’s net surplus by 61.83% as compared to their year 2000 financial operations.

In the celebration of the 2003 Cooperative Month, Iligan Cement Multi-Purpose Cooperative won the (1st) Place for the Booth Contest-Non Agri Category sponsored by then-Congressman Alipio ‘’ Tikbong” Badelles. The cooperative was awarded Three Hundred Thousand Pesos (PHP 300,000.00) worth of infrastructure projects which led to the opening of ICEMPC drops Purified Drinking Water and Water Refilling Station on October 25, 2008.  This business undertaking managed to help not just only their members but also their neighboring communities by offering them a minimum capital requirement to form the distributorship and dealership with the cooperative. At present, ICEMPC has 24 water distributors and 34 dealers.

The Articles of Cooperation and By-laws of the cooperative were amended again in June 2011 to extend its membership to the community by accepting the direct dependents of their regular members who were retrenched from their jobs in the cement plant.  As of December 31, 2019, ICEMPC already has 327 members; 165 plant employees, and 207 community-based members, including some barangay officials, water refilling station patrons, family contractors, and members from the neighboring barangays.

In the year 2012, ICEMPC’s consumer division extended its canteen operation through the catering services and accepted short orders for any occasion. It catered food for anniversaries, parties, meetings, and other activities of primary cooperatives in Iligan City. Through this added economic activity, ICEMPC’s  net surplus increased by 32.26% compared to 2011.

Further, the credit and service operations which serve as the cooperative’s main sources of economic activity offer various loan facilities that cater to member’s needs like funds for the education of their dependents, some already attained college degrees and landed in high paying jobs.  The services also opened some doors to their members to become entrepreneurs and few had become winners in MASS-SPECC’s search for Mindanao Cooperative Micro-Entrepreneurs Award (MICMA).

As ICEMPC’s adherence for the safety of its member and its staff, the cooperative availed Banco de Oro’s (BDO) POS swipe facility which caters ATM card withdrawals in the office for minimal service fee, thereby saving the time and effort of the person from going to the bank.

One of its plans and programs is to engage in agri-business, wherein the cooperative intends to acquire at least 3 hectares of land for their piggery and cacao growing. It has lined up activities for its community involvement as part of its social responsibility. For the past three (3) years, ICEMPC led the Mangrove Tree Growing Activity at Bayug Island, Hinaplanon, Iligan City during the Cooperative Month where various cooperatives in the city participated. ICEMPC’s General Reserve Fund is well funded, placing its investments to cooperative federations and other financial institutions.

Today, ILIGAN CEMENT MULTI-PURPOSE COOPERATIVE is under the large category coop, which employs 19 personnel. The government has generated PHP 972,000.00 taxes for the past 5 years and the cooperative’s assets reached  PHP 128,666,813.00 as of the year 2019 with a total membership of 585.

All the challenges surpassed and mission accomplished by the  ILIGAN CEMENT MULTI-PURPOSE COOPERATIVE through the years are the products of hard work and dedication of its members, officers, and staff. 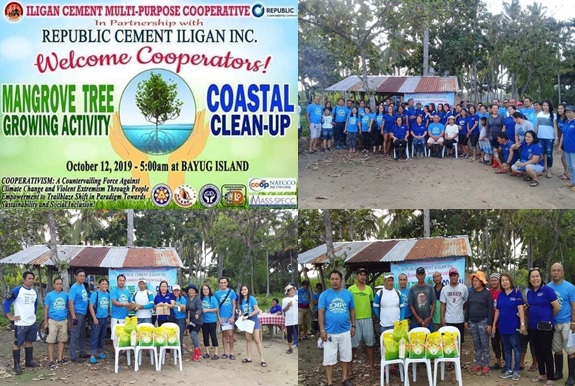