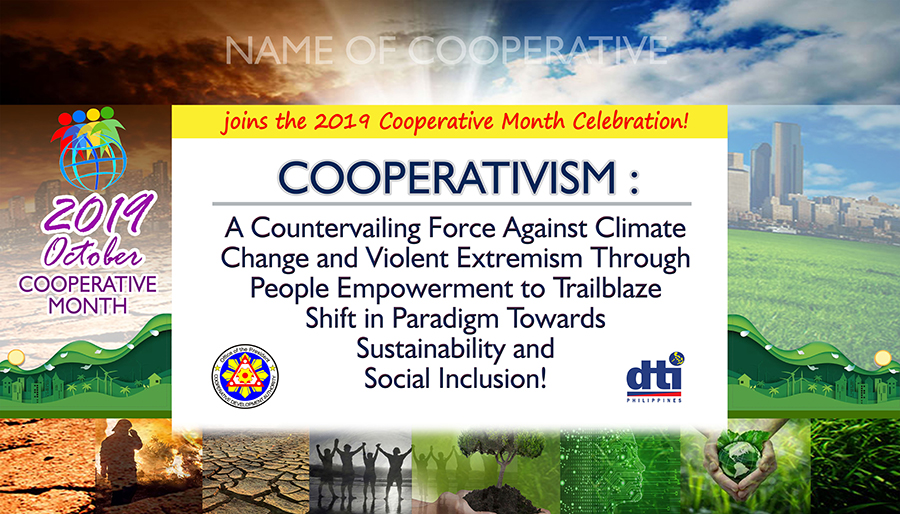 The Cooperative Development Authority (CDA) is pleased to inform the cooperatives and the movement of this year’s theme for the Cooperative Month Celebration.  The theme was approved by the CDA Board of Administrators in its meeting on September 17, 2019 under Resolution No. 429, S-2019, to wit:

“COOPERATIVISM: A Countervailing Force Against Climate Change and Violent Extremism through People Empowerment to Trailblaze Shift in Paradigm Towards Sustainability and Social Inclusion!”

Rationale of the theme:

All of us are acutely aware that the world is changing profoundly, Everywhere – gross inequality, decline in social justice, crisis in democracy, financial and economic instability, rising ecological turbulence due to climate change and violent extremism as recently exemplified in the Marawi siege and a Filipino turned suicidal bomber are phenomena which unfortunately are becoming ordinary. No less than our beloved President is very much worried as headlined in the July 11, 2019 in The Philippine Star. “I fear the future ahead and I cannot anymore sleep,” said the President due to climate change and violent extremism.

Let the 18,000 cooperatives with some 10.7 million members be true to the DNA of cooperativism which is members-owned (equality and no one shall be left behind); value- based and principles- driven (to respond to the challenges of the times); and sustainability including social inclusion (the urgent call of the times). Indeed, the dysfunction of the present development paradigm must be rectified through paradigm shift towards more sustainable kind of development and one that will banner prosperity for all as it is the conclusion that only one percent of the population globally has benefited from the contemporaneous economic model.  Indeed, the wealth of that one per cent is far greater compared to the total combination of the assets of the 99%. As stated by social scientists, neo-liberalism economic model is only successful in sacrificing mother earth and the people to the altar of greed and profit as self-gratification is the order of the times.

Humanity as concluded in a Study by Oxfam is so enamored in self-promotion, trivialities and external looks.  So much materialism and consumerism has captured the mindset of the human beings with so much veneration of the profit motive and the denigration of spiritual values.

Climate change has put humanity in crisis and violent extremism is looming not only in the Philippines but globally.  Unfortunately, the mainstream media seems to be mum on these issues. Global corporations are in control as the 19 fossil companies don’t want to stop their rakings of some 5 trillion dollars yearly (or 10 million dollars a minute) even if the CO2 emission has already reached a critical level of 450 PPM

Let the 2019 Cooperative Month Celebration give a strong message that indeed change has come under the present dispensation. For those who have dreamt, struggled, advocated and even died for it, social change has been so elusive all these years despite 14 years of martial law and two people-power revolutions.  The structure and system that are breeding poverty remain as formidable as ever.  But not anymore under the administration of President Rodrigo Duterte.  This is the call of the cooperatives nation-wide as we are one with the President in advancing social transformation.  Even the UN in its 17 SDGs has followed the theme: “Transformative Cooperatives for People, Planet, Prosperity and Peace.”

On people empowerment. The root cause of poverty in this country is not the lack of resource, the Philippines being the richest country in the world with regard to natural resources but the powerlessness of the people to have access and control over resources which are fast slipping through their fingers.  By harnessing their collective power through cooperativism, the people are empowered to trail-blaze shift in paradigm.

Somehow, the theme must give a strong message of what cooperativism is all about as provided for by the highest law of the law: “to promote the viability and growth of cooperatives as instruments of social justice, equity and economic development,” during these most critical times when efforts are again being done to tax the cooperatives. Let the cooperatives celebrate cooperativism as really the countervailing force not only against social injustice, inequities and poverty but against the prevailing problems of climate change and violent extremism which loomed from gross inequities and social injustices.  Let the Supreme Court’s decision be echoed: “While the power to tax is very strong taxes being the lifeblood of the nation, but it must bow down to the principle of social justice.