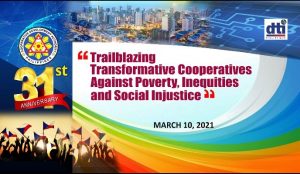 As the Cooperative Development Authority (CDA) celebrates its 31st Anniversary, support from key government officials were given with their presence during the event, on March 10 at the CDA Head Office grounds.

Spokesperson Harry Roque, Trade and Industry Secretary Ramon Lopez and DILG Usec. Zyril Carlos, were present during the celebration, verbally confirming their support to CDA and the cooperative sector in all its programs, for cooperatives are indispensable partners in nation-building. 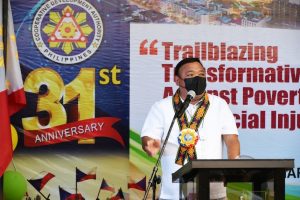 Not known to all, Sec. Roque conveyed that he was one of those who pushed for the creation of the CDA, when he was a staff of a legislator in late 1980’s, based on his experience as a cooperative member in Michigan. “Ang karanasan natin, kung tayo ay nagsasama-sama, nagtutulungan, at kung tayo ay gumagalaw sa isang kooperatiba, na talaga naman ang ibig sabihin ay pagsasama, mas malakas ang tsansa para magtagumpay”, the spokesperson stated.

Programs of the government were also articulated, such as the micro financing loans and Shared Service Facilities (SSF) of the Department of Trade and Industry (DTI), which provides assistance in the operations of cooperatives, in terms of financial as well as machineries and equipment. 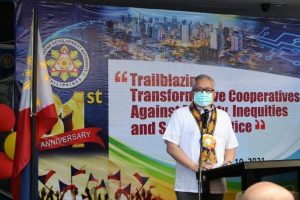 There were also video messages from Chairman of the House Committee on Cooperative Development, Cong. Presley de Jesus, as well as the Chairman of the Senate Committee on Cooperatives, Senator Juan Miguel Zubiri and Senator Christopher “Bong” Go, who unequivocally supported the CDA and the sector, through the passage of laws that will empower cooperatives and their contribution to the economy. 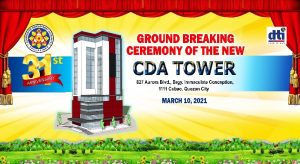 One of the highlights of the celebration is the groundbreaking ceremony for the CDA Tower to be constructed within the year, which is a manifestation of the commitment of the government in providing an atmosphere that is a conducive working place for CDA employees, thereby enhancing their capabilities in the discharge of their duties. 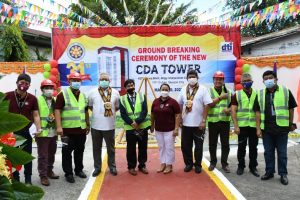 Present were the CDA Board namely Usec. Orlando Ravanera, ASecs. Abad Santos, Myrla Paradillo, Vidal Villanueva III, Dr. Virgilio Lazaga, Abdulsalam Guinomla and Pendatun Disimban. Around 200 participated in event, which is part of the week-long celebration of the CDA Anniversary, in collaboration with other government officials, cooperative sector and partners. (Cherryl Catrina B. Marders)