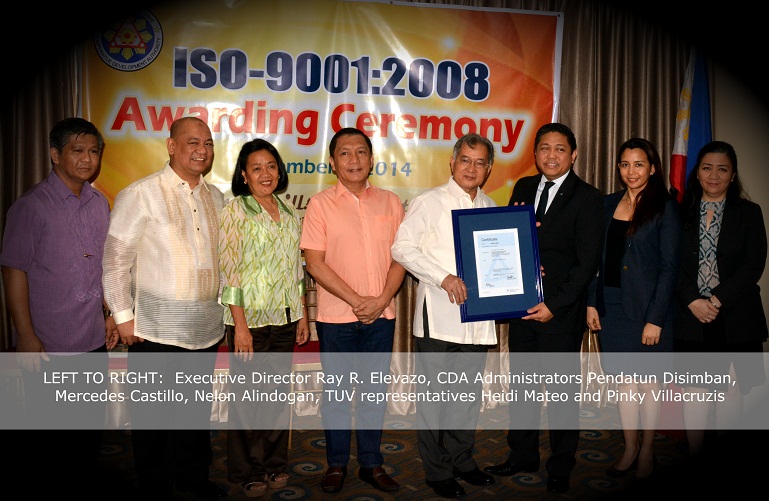 Quezon City, Philippines. In a rare occasion for a government office, the Cooperative Development Authority gets ISO 9001:2008 for Central and all regional offices throughout the country. TUV Rheinland, thru its Philippine office represented by its Chief Operating Officer Tristan Arwen G. Loveres, awards the certificates to Tuguegarao (Region II), Naga (Region V), Cebu (Region VII), Ilo-ilo, (Region VI), Pagadian (Region IX), Cagayan De Oro (Region X), Davao (Region XI), Kidapawan (Region XII) and Caraga Extension Offices on December 4, 2014 during the 2nd CDA Performance and Planning Conference at Greenhills Elan Hotel, San Juan City, Manila. It will be recalled that the Central and Manila Extension Offices were initially given the certification for meeting the standards in CDA registration process on December 12, 2012. This was followed by Bagiuo (Cordillera Administrative Region), Dagupan (Region I), Pampanga (Region III) and Calamba (Regions IV-A & IV-B) in 2013. The Tacloban (Region VIII) was originally included in the list of the CDA offices targeted to be certified but because of the aftermath of Super Typhoon Yolanda which wrecked the entire city of Tacloban where the CDA regional office for Eastern Vizayas is located, the same office is belatedly re-scheduled to be subjected to ISO certification processes next year.

Mr. Tristan Loveres, praised CDA for this achievement. He said that the standards will be uniformly applied to all offices of the CDA in the whole country. This is an “evidence of CDA’s compliance with the international standards which takes focus on customers’ satisfaction,” Loveres added.  Because of the ISO Certification of CDA, the agency and its officers and personnel will be mindful of the continual improvement of the systems and processes because of institutionalization of the customers/clients feedbacks. This will result to total customers’ satisfaction which augurs well for the good public image of the agency which will redound to the increased goodwill of the cooperative sector and stakeholders.

The TWG on Awareness Capability Building of the Government-wide Quality Management Program (GQMP) had identified CDA as one of the priority agencies for the ISO 9001-certifiable Quality Management System (QMS) that will address our country’s improvement of the world competitiveness scorecard. This was the start of the CDA’s journey toward ISO certification as shared by Executive Director Ray Elevazo.

Being an ISO Certified agency, it will surely boost the morale of the working force which will motivate them to become more productive and customer focused.

In his message, Administrator from Luzon Nelon Alindogan highlighted this another milestone in the chapter of the history of the CDA of getting the ISO 9001:2008 Certification.  He shared his experience during his stint in the private sector how tedious it was for the manufacturing firm to acquire that seal of high international standards of Quality Management System.  This achievement is something that the members of the CDA family must treasure for long.  He mentioned that this is just the beginning and we must sustain this gain so that our effort will not be branded as a mere “ningas-cugon.” We must continue in our effort towards achieving excellence.

Administrator from Vizayas Mercedes Castillo extended congratulatory messages to those CDA personnel especially who painstakingly contributed time and effort that made this achievement possible.

In his acceptance message, CDA OIC Dr. Eulogio T. Castillo stressed: “ang ISO 9001:2008 ay isang di-pangkaraniwang kaganapan sa bureacracy.” It is very rare that a government agency, including all its regional offices, is bestowed ISO certification. “Ito ay simbolo ng pagtanggap at pagtalima sa isang tungkulin na maglingkod ng buong husay sa ating mga kliyente.” Dr. Castillo added in the presence of the CDA Directors, Assistant Directors, Division Chiefs among other CDA staff who graced the affair. “I am fortunate to be in company of world class workers. You are indeed are rare species!” he concluded.

Congressman Anthony Bravo of COOP NATCCO Party-List who attended the event congratulated the officials and personnel for this feat. He said that the ISO certification is just the beginning.  How to make a difference as an ISO organization is a challenge that the CDA has to face.  He assured everybody that he is and will be partner of the CDA forever.

The certification of the entire CDA will establish the uniform and consistent application of the registration systems, processes and procedure from one organizational unit to another.

This latest milestone is the realization of the commitment of the Department of Finance to the President in the cabinet planning tool submitted in 2012 that by 2014, all offices of the CDA are ISO 9001:2008 certified. The CDA is under the Office of the President but the administrative supervision of the agency was transferred to the Department of Finance by virtue of EO 332 s-2004. With this, the CDA is gearing up towards enhancement of the organizational capacity to making cooperatives as instrument of social justice, equity and economic development. The award is very timely as the cooperative sector will celebrate the Centennial of Philippine Cooperatives next year.

The Directors and Assistant Director shared their thoughts on the occassion.

CARAGA EO Director Genaro Pogata said that “we can do things better than yesterday and strive to achieve better tomorrow than today.” Kidapawan EO Director Aminoden Elias added that the latest feather added on our cap is a product of teamwork and we displayed “stability under pressure.” Davao EO Director Elma Oguis mentioned that we lived up to the challenge to “make do with the limited budget.”  Cagayan De Oro EO Assistant Director quipped that ISO Certrification brought “camaraderie and positive morale among our staff.”

Pagadian EO Director Ruben Cunanan on his part said that this milestone stands for “united spirit.” His staff showed “mixed emotion” and made the “bind among us stronger.” Cebu EO Director Felipe Deri on his part quoted Aristotle: “excellence is never an accident. It is always the result of high intention, sincere effort, and intelligent execution; it represents the wise choice of many alternatives–choice, not chance determines your destiny.”

Naga EO Director Malu Pacao enjoined everybody that we should not rest on our laurels. We must not be contented with just sustaining our achievement. We must strive for continual improvement. “Complacency is the mother of stagnation!” she emphasized.

Tuguegarao EO Assistant Director Artemio Guzman said that the  ISO means setting the bar of excellent quality service. Ilo-ilo EO Director Arnel Agrasada shared the transformation of their extension office amidst constraints and difficulty. They were able to hurdle those “doing the things our way.” All told, the ISO 9001:2008 cetification is an early christmas gift for CDA.