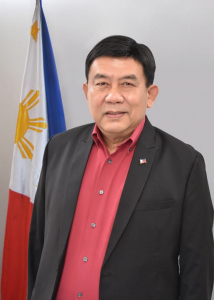 Assistant Secretary Virgilio R. Lazaga. MD, was born in Sta. Cruz, Laguna on March 19, 1958. He was originally from Calamba City, Laguna but is now residing in Sta. Rosa City, Laguna. He is a graduate of Doctor of Medicine 1983 in University of Perpetual Help, Laguna.

Prior to his appointment, Dr. Lazaga was the former Medical Director in Ospital ng Cabuyao in Cabuyao, Laguna. He also served 4 years (2004-2008) as the Officer in-charge in the City Environment and Natural Resources Office (CENRO) in Calamba, Laguna. Thereafter, he was assigned as City Tourism Officer for Calamba City Tourism, Sports and Cultural Office for 2 years. In 2013, Dr. Lazaga served as the Chairman – Committee on Mediation and Conciliation and Co-Chairman – Committee on Ethics in the Calamba Rice Growers Multipurpose Cooperative.

In his consistent and innate passion for nationalism, he is on his way to initiate plans that will indoctrinate programs amongst the Filipino farmers, fisher folks, livestock raisers, dairy industry, and agrarian beneficiaries to focus not only in food security but life longevity by being more efficient, resilient and productive in the best and deserving agricultural practices.

On February 6, 2020, Dr. Lazaga was appointed as Assistant Secretary and took his formal oath taking at the Malacanang Palace, Manila.