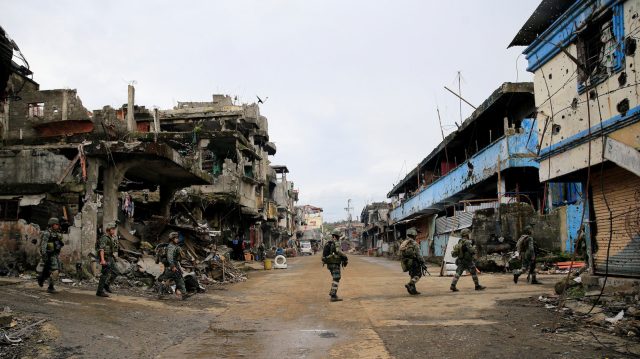 The Cooperative Development Authority (CDA) joins with the 28 thousand registered cooperatives with some 14 million members in the Philippines and the more than one billion cooperative members around the world in celebrating this year’s International Day of Cooperatives (IDC), through the launching of the “Marawi Rehabilitation through Cooperativism” Program in the City of Marawi, on 7th July 2018. The program aims to rehabilitate the cooperatives in the obliterated Islamic City and capacitate the cooperative members through livelihood trainings and assistance, and ultimately establish a sustainable community. This is also the Duterte Administration’s answer to the immediate livelihood intervention for the Internally Displaced Persons (IDPs) in Marawi City.

To make sure the success of this program, CDA Board of Administrators passed a resolution creating the Project Management Committee, chaired by Administrator Paisal I. Cali who himself is a victim of Marawi siege, being a resident in the city. The composition of the Committee includes; Administrator Abdulsalam A. Guinomla who is also from Mindanao, Atty. Elizabeth O. Batonan and Atty. Jovilyn Gaffud-Marquez from Legal Division, Dir. Nonie I. Hernandez and Mr. Pedro Defensor Jr. from the Institutional Development Division, Ms. Melissa C. Santos and Mr. Lester John Molina from the Cooperative Research, Information and Training Division.

In another board resolution, CDA BOA also created a Project Management Team who would implement, monitor and report the progress of the project from the ground. The team will be led by CDA Kidapawan Dir. Aminoden A. Elias as Project Manager, who is also a resident of Marawi. He will be assisted by Cooperative Development Specialists from CDA Kidapawan and Pagadian Extension Offices.

The theme for the 2018 IDC is “Sustainable Consumption and Production”, to create an opportunity for cooperatives to show how they run successful businesses while respecting natural environment and the resources it offers, while the slogan of the Day is “Sustainable Societies Through Cooperation”, which was chosen by cooperators from around the world to enable local and global policymakers learn how cooperatives contribute to more sustainable and resilient societies and work towards including cooperatives in policy processes related to sustainability issues.

In the Philippines, CDA wants to make the celebration more meaningful by doing it in Marawi City, the Islamic City in the Southern Philippines which was rendered into rubbles after the siege in 23rd May 2017 by the Islamic State of Iraq and the Levant (ISIS) affiliated Maute and Abu Sayyaf terror groups.

In retrospect, in the five-month war between the government forces and the terrorist groups, more than 353,000 people were displaced and have been seeking refuge in different areas of Mindanao. Marawi City is also home to 73 active cooperatives with some 8,000 members whose hopes, homes and businesses were also torn into rubbles because of the conflict. CDA will help them rehabilitate their lives, homes and livelihoods through the “Marawi Rehabilitation through Cooperativism” Program of the Authority, being part of the Task Force Bangon Marawi (TFBM), under the Sub-Committee on Business and Livelihood.

According to CDA OIC Chairman Benjie S. Oliva, “We will show the world how cooperativism works through the CDA’s intervention and by contributing to the establishment of more sustainable and resilient societies”.

“Cooperatives being members-owned have sustainability in their DNA, and following the seventh cooperative principle, ‘Concern for Community’, cooperativism is a potent tool in rehabilitating Marawi City holistically and establishing sustainable societies”, he added.

In the meantime, the CDA Central Office and CDA-Autonomous Region in Muslim Mindanao (CDA-ARMM) are forging a Memorandum of Agreement to: identify and profile the 73 coops, establish a database for profiled beneficiaries, conduct needs assessment for the business and livelihood, provide capacity building, provide funding to approved proposals from coop-beneficiaries, and monitoring of the coop-beneficiaries.

CDA Administrators led by OIC Chairman Oliva and CDA Regional Directors will spearhead the event. While hundreds of cooperative members are expected to join the IDC celebration and CDA’s launching of “Marawi Rehabilitation through Cooperativism” program.