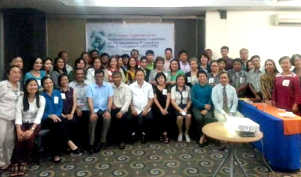 The Cooperative Development Authority (CDA) convened the National Coordinating Committee on Cooperatives Promotion and Development (NCCCPD) as the lead government agency on cooperative monitoring, development and regulation.  The organization of the NCCCPD is in compliance with the stipulation of Executive Order No. 95 issued by Former President Fidel V. Ramos, that “all government branches, instrumentalities, subdivisions and agencies with programs and projects concerning cooperatives to coordinate such programs and projects with the CDA with a view of providing a comprehensive technical and financial program for cooperatives”.  It also served as a networking mechanism of the CDA with partner government agencies to promote and implement programs relative to cooperative development.

The NCCCPD Annual Conference was graced by CDA officials led by Administrator Paisal I. Cali, Executive Director Ray R. Elevazo, Deputy Executive Director Giovanni T. Platero and Institutional Development Department Director Fe D. Caingles.  Deputy Executive Director Platero emphasized in his opening remarks the need to make the collective efforts and deliverables of interventions of government agencies more concrete so that it will be appreciated at the grassroots level and that the ultimate development felt by the cooperative beneficiaries and members. In the message of Administrator Cali, he stressed that CDA is trying its best to balance its roles in terms of regulation and development of cooperatives.  Despite the minimal budget of the agency, it has been providing technical assistance for the development of cooperatives.  He accentuated the significance of this NCCCPD Conference to strengthen the relationship with government agencies, coordinate and integrate plans and programs to maximize the resources of the government and achieve optimum results.

In the closing, Executive Director Elevazo, reiterated the request for support of the different government agencies in the attainment of the deliverables of the CDA Road Map.  He also offered the assistance of the CDA in the implementation of their programs and projects.   Since result of this conference affirmed the need for collaboration among government agencies to effectively deliver its services to the public. (Maria Corazon G. Diwas)