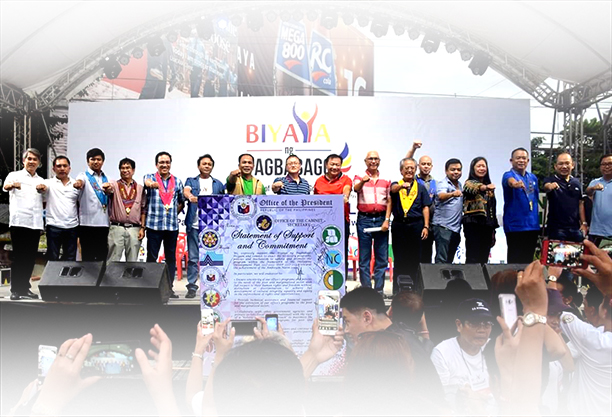 The CDA led by Chair Orlando R. Ravanera made its presence strongly felt in the launching of the Biyaya ng Pagbabago Tungo sa Masagana at Matiwasay na  Buhay Pilipino or BIYAYA NG PAGBABAGO, the newly conceptualized flagship poverty alleviation program of the Duterte administration through the Office of the Cabinet Secretary headed by Secretary Leoncio  Evasco, Jr.

The launching was held at the Freedom Park in Davao city on December 9, 2017 and was attended by representatives of the government sector, the private sector spearheaded by the Kilusang Pagbabago a mass movement supporting the programs of President Rodrigo Duterte, thousands of cooperative members coming from different parts of Mindanao, and indigenous tribal groups.

In addition to Cabinet  Secretary  Evasco’s firm message for the need for change to be felt in the countryside, Speaker  Pantaleon Alvarez  roundly  asserted the various and significant accomplishments of President Duterte and the plans of the Duterte Administration next year which includes the proposal to amend the constitution.  Speaker Alvarez was at hand to represent President Duterte who was not able to make it in said launching

According to the media advisory issued by the office of the Cabinet Secretary, Biyaya ng Pagbabago or blessings of change aims to improve the living conditions of the Filipino people, especially the marginalized and most impoverished by pushing government services to be more responsive, adequate, timely and effectively delivered to those that need it most. It also aims for citizens to be more proactive and communities to be more empowered in participatory governance and in inclusive economic development. This poverty alleviation program emphasizes that a “whole of government” sector and area focused poverty alleviation strategy should be operationalized.

In his expression of support for the Biyaya ng Pagbabago, Chairman Ravanera unconditionally committed the resources and programs of CDA behind this program. In elaborating this commitment of CDA, Chairman Ravanera specifically enumerated the following  programs of CDA that will serve as the backbone of activities in CDA’s contribution to poverty alleviation: 1)  Pagpapataas at Pagpapaunlad ng kaalaman  or capacity building programs for cooperatives, 2) koop kapatid; 3)CDA-DAR Partnership program; 4) DTI-CDA Coop SEED Program; 6) CDA Value Chain Program thru cooperatives: 7) CDA BAMATA Tribal Program.

The highlight  of the activity which  focused on CDA, was the symbolic turn over of a check worth P2,000,000 to the CDA from the National Commission for Muslim Filipino, intended for cooperative programs that will benefit our muslim brothers and their families. The grant of the fund to CDA was a recognition of the vital role of CDA in shepherding cooperatives towards poverty alleviation.

The Biyaya ng Pagbabago program was initiated as a response to the staggering socio economic and political inequalities afflicting the Filipino people. Among those factors cited as  indicative of this  dire situation of the Filipinos are: there are approximately 21.9 poor Filipinos: 3.4 million families are experiencing involuntary hunger: there are 5.7 housing backlog for socialized housing: there is a decline in agricultural productivity among others.

This poverty alleviation program is aligned with the objective of the Philippine Development Plan 2017-2022 to reduce poverty in the country from 21.6% to 14%.