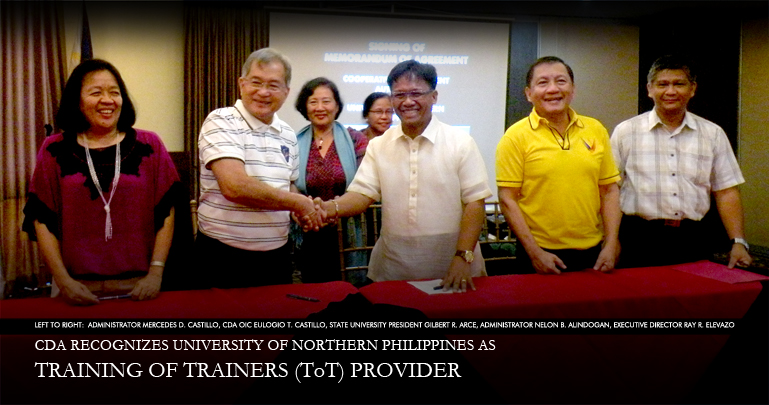 The University of Northern Philippines (UNP) was recently added to the list of recognized state university and colleges (SUCs) that the CDA has partnered with in the provision of training of trainers to CDA Accredited Cooperative Training Service Providers. In his speech before CDA officials and regional directors during a Memorandum of Agreement (MOA) signing between CDA and UNP held on December 5, 2014 at Elan Hotel, San Juan Manila, state university President Gilbert R. Arce thanked the CDA “for accommodating it thru a partnership which will strengthen its function as a pre-service training provider,” ..”hoping that this will spell mutual benefits between the two parties in providing quality service to the young who will be leaders of the future. “Arce added that “the University of Northern  Philippines takes pride in being the only university to have acquired accreditation in its Business Management course and looks forward to a continuous partnership with CDA withan end goal of making the Philippines as a cooperative hub of Asia.”

For his part, OIC Adm. Eulogio Castillo said the partnership is “a paradigm shift of the CDA oftaking care of the micro and small cooperatives,” and by “mobilizing SUCs in every province, it becomes an instrument in changing the lives of the people.”(MGC)