The Credit Surety Fund (CSF) Service conducted a road show and Contributors’ Orientation Seminar (COS) in Alaminos City, Pangasinan as part of the Service’s promotional strategy to heighten the awareness of the general public on the benefits of organizing or joining a CSF cooperative to Micro, Small and Medium Enterprises (MSMEs) which include primary cooperatives. The road show was facilitated by CDA Region I Extension Office in Dagupan City led by Acting Director Alberto Sabarias in partnership with the Local Government Unit (LGU) of Alaminos City through the office of City Mayor Hon. Art Bryan Celeste and Councilor Arthur Celeste, Jr. Acting Director Sabarias was assisted by Mesdames Fiona Bianca Cuenca, Acting Chief of the CSF Unit, CDS I Christine Joy Combes & Ms. Renee Faye Cariño CDS II field personnel assigned in that area. Mr. Solomon Tablang, City Cooperative Development Officer represented the city’s LGU who relayed the message of support and cooperation of the City Mayor in organizing the CSF cooperative. 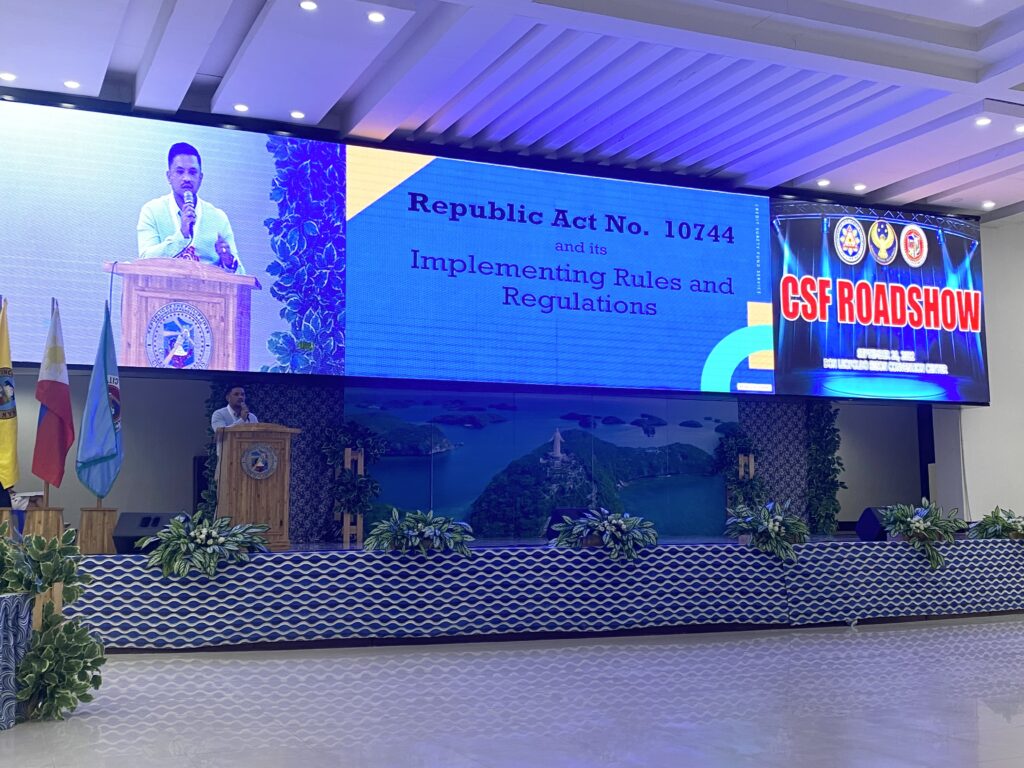 Other staff of Technical Assistance Division present who assisted in the documentation & facilitation of the roadshow activity were Supervising CDS Mary Grace I. Cinco, CDS II MaryGrace Jaquilmac and CDS I Rean Escandor.

Ms. Eleanor Ramos, Manager, Financial Inclusion Office of the Bangko Sentral ng Pilipinas (BSP) gave an orientation on CSF highlighting the benefits of the program for MSMEs. It was followed by a presentation on the salient features of the Credit Surety Fund Act or R.A. 10744 by Atty. Robles. Chief Transfiguracion presented the latest statistics of CSF Cooperatives in the country and the mandatory registration requirements to organize a CSF cooperative.

Cooperative Development Officer Mr. Solomon Tablang in his message said that the city mayor highly supports the advocacy of the CSF especially in providing opportunities to earn additional income for micro entrepreneurs which can translate to economic development of the City of Alaminos. He added that the city mayor has committed his support and just awaiting the monetary contributions of primary cooperatives which are willing to be organized as CSF cooperative before it grants the LGU’s counterpart contribution.

During the open forum, Ms. Emma Siapno of Pangasinan CSF expressed appreciation to the initiative of the LGU of Alaminos in supporting the CSF program as it is now localized and the assistance is much closer to potential beneficiaries. However, she cited the costly requirements in registering a CSF cooperative which can hinder its registration such as the notarial fee which is based on the amount of the fund contribution. In response, Deputy Administrator Pacao said that the cooperatives through the Cooperative Development Council can explore partnership with the Integrated Bar of the Philippines (IBP) President of Alaminos City for this purpose.

The CSFS and BSP both expressed their appreciation to the LGU of Alaminos City and the CDA Regional Office of Dagupan City for the very successful turn out of the road show.

For the ways forward, the CDO, having echoed the full support of the LGU to the organization of the CSF Cooperative in Alaminos City, shared that the amount of contributions of the interested cooperatives and other concerns shall be discussed during the meeting of the City Cooperative Development Council which is scheduled within the week.

In the afternoon, the CSFS team together with staff of the CDA Region I office visited the office of Maawi-Alos Farmers (MAF) MPC, a primary cooperative that is willing to join a CSF cooperative to be organized in Alaminos City. MAF MPC was among the primary cooperatives that attended the road show.