The Cooperative Month Celebration finds more meaning for the Siquijor cooperatives and their members with the convergence of the Cooperative Development Authority’s (CDA) Credit Surety Fund Division, CDA Cebu Extension Office, Provincial Government of Siquijor and Bangko Sentral ng Pilipinas – to come into fruition the highly anticipated Road Show and Contributors Orientation Seminar (COS). This is to heighten the awareness of the Siquijodnon’s to the wide array of benefits of organizing and active participation to Credit Surety Fund (CSF) Cooperative to micro, small, medium enterprises, particularly the primary cooperatives. 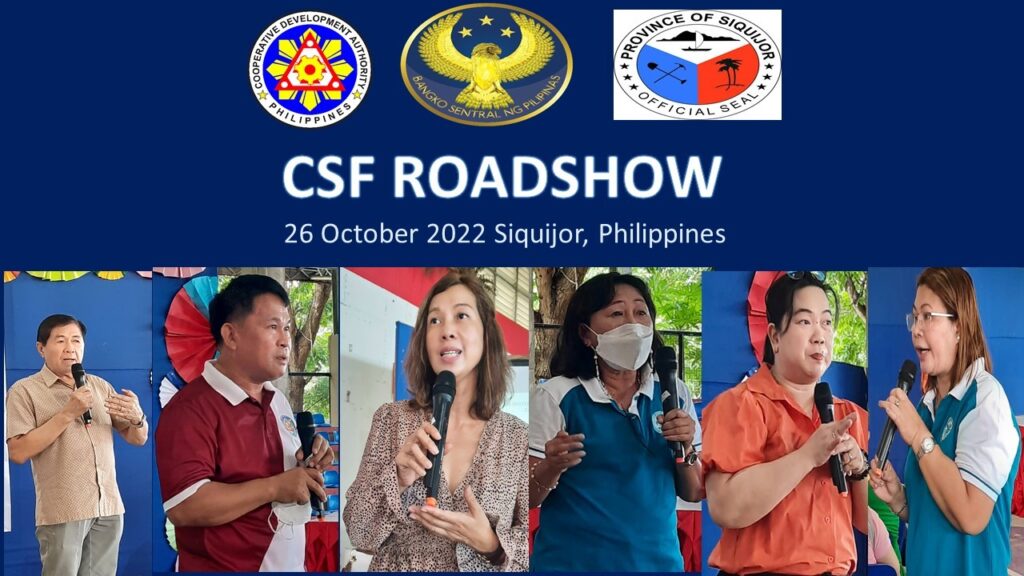 Numerous cooperatives graced the momentous event across the six municipalities in order to know and understand the valuable contribution of the CSF cooperative to the sector, to the community and especially to their personal lives. The Office of the Honorable Meynard B. Asok, Chairman of the Committee on Cooperatives of the Sangguniang Panlalawigan warmly welcomed the participants. He substantially assured the cooperators that he will sponsor an ordinance in support of the creation of the CSF Cooperative.

Assistant Regional Director Cipriana D. Mumar of CDA Region VII set the primary objective of the Road Show which is to promote the CSF Cooperative in accordance with Republic Act 10744 also known as The Credit Surety Fund Act of 2015. The Act serves as a means to increase the creditworthiness of the cooperatives. She positively announced that Region VII has already produced three (3) CSF Cooperatives from Mandaue City, Bohol and Negros Oriental. Siquijor CSF Cooperative will soon complete the provinces of Regions VII with CSF Coops.

ARD Mumar’s announcement was significantly affirmed and confirmed by the Siquijor Provincial Administrator Honorable Cyrus S. Olpoc. The Provincial Government of Siquijor from the beginning fully supported the movement, technically and financially. In essence, Mr. Recto Transfiguracion, Head of the Technical Assistance Division of CSF Services Department emphasized that the creation of this special type of cooperative is in realization of the CDA’s mandate which is to promote the viability of cooperatives as instruments of equity, social and economic development.

Bangko Sentral ng Pilipinas, which spearheads the promotion, encouragement, creation and organizational development of CSF Law was represented by Ms. Eleanor Ramos, Manager Financial Inclusion Office. She said that: “Cooperatives’ great challenge is to produce hard collateral in order to obtain loans from the banks. The CSF Cooperative Fund, will serve as a security for loans obtained from the bank. More access to loan facilities means more opportunities for business expansion.”

Ms. Josie Villaver, Acting Supervising CDS of Inspection and Examination Division of CSF Department Services together with Mrs. Gina F. Repunte, Senior CDS CSF Section, discussed the online registration and mandatory documentary requirements for the creation of CSF Cooperative. They emphasized the vital roles of the LGU, Non-Government Organizations (NGOs) and financial institutions in the creation, coordination, and collaboration in completing the process of registration and functionality of the CSF Cooperatives. Now that the CSF Information System is fully implemented, ease of registration is already within reach.

During the open forum, some of the apprehensions as to how the CSF Cooperative will be created, the legal limitations, financial constraints, and documentary requirements preparation alongside with sustainable solutions were heavily emphasized. Several Department of Agrarian Reform assisted cooperatives – medium and big cooperatives – expressed their earnest desire to join the CSF cooperatives.

The cooperators expressed their heartfelt appreciation for CDA’s intensified efforts in reaching out to the cooperatives in the province. Now that the PCDO and Siquijor- stationed Cooperative Development Specialist is in a strong alliance, soaring of cooperatives to greater heights is surely attainable.

The worthwhile undertaking was formally closed by Mr. Petronilo Bulangis, Vice Chair of Siquijor Provincial Union of Cooperatives. He called for the unity of cooperatives as well as active participation in the cooperative movement’s activities, plans and programs together with CDA.

The Road Show and COS might officially be over, but CDA CSF Service will continuously expand the Authority’s mission which is to be an effective and efficient regulatory agency working towards the development of viable, sustainable, socially responsive and globally competitive cooperatives. This time, with Siquijor Province as the viable place for a CSF Cooperative!