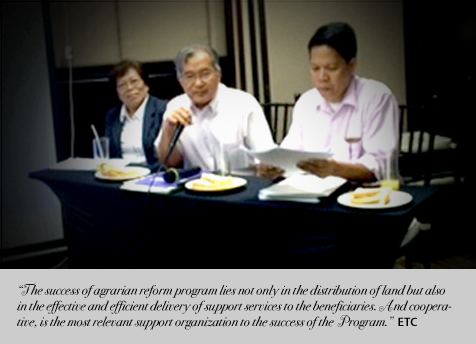 The collaboration of the Department of Agrarian Reform (DAR) and Cooperative Development Authority (CDA) to strengthen the institutional capacity of agrarian reform beneficiary cooperatives commenced with the signing of “DAR/CDA Partnership Program” on December 7, 2012. The Program manifested the desire of both agencies of government to successfully implement the nation’s agrarian reform program through the strengthening of the institutional and entrepreneurial capacities of the ARBs cooperatives.

The Program was the subject of the conference of the fifteen (15) Regional Extension Offices Directors, Assistant Regional Directors and Headquarters’ Officers on September 30 to October 1, 2014 at Eurotel Hotel in Quezon City. The conference sought to assess the Program with the end view of strengthening the DAR/CDA Partnership in the delivery of support services to agrarian reform beneficiary cooperatives.

The Program was also participated in by DAR, Mr. Reggie D. Dionenda, who shared views and perspective about the program and the issues brought before them, and the CDA Resident Auditor, Ms. Columba Arnoco, who provided the findings on the liquidation of funds.

The Conference was a success as it was able to produce and submit to DAR the technical and administrative requirements of the Program.
{fcomment}