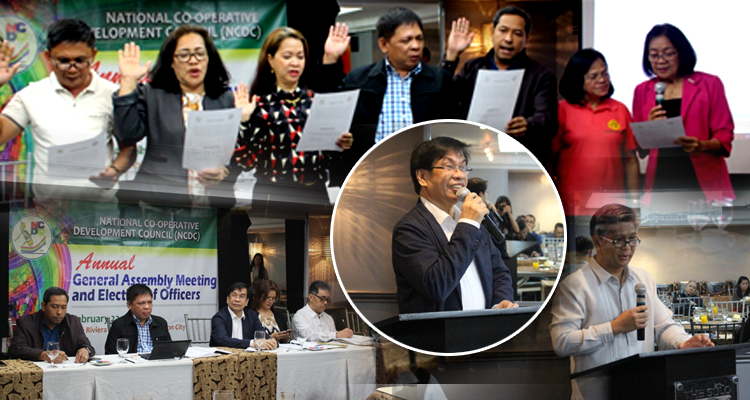 A big hand for the success of the General Assembly and Election of Officers of the National Cooperative Development Council (NCDC) held at Sulo, Riviera Hotel, Diliman, Quezon City last February 22, 2017!

The said General Assembly and Election of Officers is the one of major activities of the Council that is held annually where participation and attendance of the members of NCDC which include the Regional Cooperative Development Councils (RCDCs), CDA as the lead agency and the NCDC Secretariat, and government agencies and private organizations with cooperative programs and projects, are expected.

The event marks another beginning for the leadership of the newly and reappointed officers of the council in the persons of Mr. Samie M. Billanes, as the re-elected Chairperson; Mr. Mansueto A. Dela Peña, as the new Vice-Chairperson, the Council’s Auditor last year and the current Chairperson of RCDC X; Ms. Celia L. Atienza, as the re-elected Secretary and the President of the Liga ng mga Cooperative Development Officers ng Pilipinas (LCDOP); Ms. Nancy F. Marquez, as the re-elected Treasurer, the Chairperson of RCDC-NCR; and Mr. George C. Castillo, as the new Auditor, who is also the new Chairperson of RCDC IX after the Chairmanship of Ms. Myra Abubakar. Ms. Geraldine Lamson from the Philippine Cooperative Center remains to be the designated Assistant Treasurer of NCDC. Ms. Myra V. Abubakar on the other hand, who was the former Vice-Chairman of NCDC for several years, was appointed and unanimously approved by the body to be the consultant of the Council. Mr. Billanes, who is now on his 3rd year of being the Chairperson of NCDC since 2015, is also the current Chairperson of RCDC VI and a former Chair of Western Visayas Alliance of Cooperatives (WVAC).

The annual assembly was graced by the presence of CDA Chairperson Orlando R. Ravanera and Executive Director Ray Elevazo. Both of them expressed their strong support to the NCDC, its officers and initiatives in bringing cooperatives in the mainstream of society.

The annual gathering served as a mechanism for sharing some updates and information about some important matters confronting the cooperative movement such as the tax exemption issue. Aside from the election of officers, it also provided opportunity for the discussion of important issues involving the Council and the initiatives each RCDC had. It offered at the same time an apt environment for the expression and reinforcement of the Council’s 4C’s – collaboration, convergence, coordination and consultation.

NCDC is the consultative body mandated under Memorandum Circular 2013-01 Series of 2013 primarily to coordinate, harmonize and monitor the implementation of various cooperative development plans, programs and projects of all government branches, instrumentalities, subdivisions and agencies. It is one of the great partners of CDA in fulfilling its mandate of promoting the growth and viability of cooperatives as instrument of social justice, equity and economic development. Currently faced with some challenges, Chairman Billanes, on the last part of his message, encouraged everyone to never stop doing things for the sake of the cooperative sector, for the advancement of the cooperative movement as everyone’s participation can bring great contribution to the growth of the nation. —S. P. Soriano