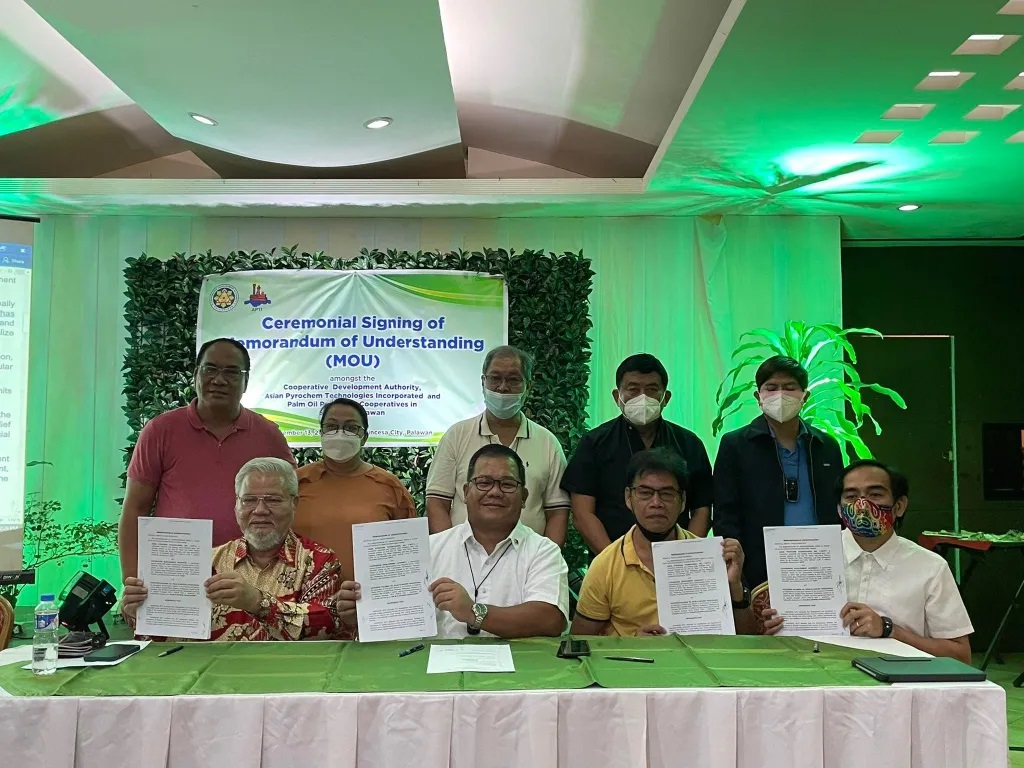 Ten palm oil-producing cooperatives in southern Palawan signed a memorandum of understanding (MOU) with Cooperative Development Authority (CDA) and an Indonesia-state based investor for the production of renewable energy as a solution to the “emerging energy crisis.”

Asec. Abad Santos of CDA said at the ceremonial signing that aside from helping farmers with their livelihood, the purpose of the project with Asian Pyrochem Technologies Incorporated (APTI) is to also produce renewable energy out of palm oil coming from Southern Palawan.

“The purpose of this project is two words – renewable energy. This renewable energy will provide solution to the emerging energy crisis in the entire province of Palawan,” he said.

No reasons were given on why the other four were not able to come.

Santos said they will engage the local government units (LGU) in the project and looking forward to push through the memorandum of agreement (MOA) signing by January 2022 or early February after all the paper works needed are completed.

Opportunity in Palawan
The APTI will negotiate with the Agumil to use their plant citing that it is under production operating at 6 hours which is far from 18-hour maximum operation.

Asec. Virgilio Lazaga, also a medical doctor, said he believes that this project is a breakthrough for Palaweños and Filipinos. Lazaga also chairs the environment committee of the Philippine Medical Association.

Lazaga added that palm oil will now be used properly for renewable energy to reduce the carbon emission in the atmosphere.

Environmental concern
Lazaga assured that they will abide by all the requirements in Palawan to ensure the health of Palaweños. He is also aware that there are different views with palm oil plantations and CDA is willing to have consultations with environmentalists to be fair with their insights.

“Sabi nila medyo dangerous sa lupa, sa nutrients and it will take some years para ma-rehabilitate and mag-go back to normal. Pero the issue here is our dwindling electric supply, given the chance to weigh the pros and cons of this palm tree electric generation, I think dapat talaga isama namin ‘yan. Before doing that, we really have to undergo a lot of consultation with environmentalists,” he said.

Engr. Harley Luis Leaño, president and chief executive officer of APTI said they plan to bring technology such as regeneration to also use the land areas with palm oil trees for diversified farming of Sumatra coffee. The areas will also be rehabilitated to help trees bear fruits.

Benefit to farmers
Leaño mentioned during his presentation that the business offers of the company include pyrocoal briquette used in tobacco plantations and production, tobacco plantation and trading to Indonesia, and compartmentalized renewable hybrid power generation.

The palm oil fruits will be sold by farmers to APTI before delivering to the Agumil plant. The capacity of their plant is at 45 tons per hour but only operates for six hours a day from an 18-hour maximum capacity.

If Agumil decides not to have a partnership with APTI, the latter will do the backyard expelling. Leaño said APTI is looking into the possibility of giving a yearly increment of payment from 5 to 10 percent from the initial P7 per kilo buying price.

Solution to energy problem
Leaño said based on their study in Indonesia, 10 megawatts can be produced in every 1,000 hectares of palm oil. The 6,000 hectares in Palawan can produce 60 megawatts which they believe is more than the needed 20-megawatts need of Palawan.

Palawan is operating through diesel which Leaño said is more expensive than the palm oil that can be produced by local farmers at P7 per kilo.

Santos said CDA already proposed the idea of renewable energy using palm oil but the “board seemed not to be interested” with his proposal. He believed that farmers will give a solution to the energy problem.

Palawan Electric Cooperative (PALECO) acting project supervisor Atty. May Flor Abuedo who was also present during the signing did not comment on the issue of the energy crisis and the proposal of renewable energy. She said she will provide an answer during the electric coop’s press conference on Thursday.

Leaño plans to have a contract with PALECO to loan from the bank to support its P1.2 billion need in putting up a 10-megawatt power. A joint venture agreement will also be made with farmers for them to have the capacity to pay.

If PALECO will not be interested in the idea, the project will be pushed through in partnership with other electric cooperatives, NORSAMELCO and ESAMELCO.