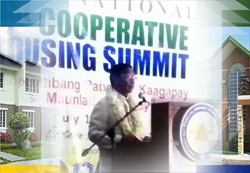 The First Cooperative Housing Summit is a product of a series of discussions and consultations between the cooperatives on one hand, and the government agencies engaged in the housing on the other. These consultations were meant to gather inputs and exchange ideas to maximize the collective power of the organizations and stakeholders present here today. Today we validate and firm up agreements reached, and more importantly, agree to move forward together.

As Antoine de Saint Exupery once said, “One man may hit the mark, another blunder, but heed not these distinctions. Only from the alliance of the one, working with and through the other, are great things born.” In other words, there is nothing like a good collaboration to achieve greater results. And that is the rationale of cooperatives-to eliminate the weaknesses of one by harnessing strength in numbers.

Cooperatives are, without a doubt, the moving force behind promoting inclusive growth in our communities. According to the National Statistical Coordination Board (NSCB), cooperatives contributed a total of P6.3 billion to the nation’s Gross Domestic Product in 2012, accounting for about 5% of total GDP.

Our key shelter agencies have existing programs and projects that are designed not only to generate housing for your members but also to ensure the sustainability of cooperatives.

Since 2011, NHA has oriented 29 associations on Cooperative Pabahay Program and has assisted 12 others in the formulation and review of their pre-feasibility studies for projects, which when implemented, would generate nearly 11,000 housing units. This is in addition to the 1,065 units that have been funded from the P20 million allocated by various congressmen from their local housing fund being administered by NHA.

Secondly, in just less than a year, the Social Housing Finance Corporation has provided almost P292 million to five housing cooperatives that would benefit 3,600 member-families, in line with the program to provide in-city housing for informal settlers living in danger areas in metro manila.

The Pag-IBIG Fund, meanwhile, is assisting ten cooperatives from different regions by funding the land acquisition and development and housing construction needs of their members.

Just last March 6, I attended the unveiling of the marker of the housing project of the Ormoc City Credit Cooperative Inc. at brgy. Dolores, Ormoc City, Leyte. The Pag-IBIG will fund land acquisition for 278 members of the cooperative who were mostly victims of Typhoon Yolanda, while the houses will be constructed through grants from various donors. This is a concrete manifestation of a partnership between the cooperative and our government housing agency, the Pag-IBIG Fund.

Another shelter agency, the Home Guaranty Corporation, has opened its guaranty program to microfinance, rural and cooperative banks that will provide financing to low-income groups for home construction or improvement. Last Monday, the HGC board approved the first guaranty line for a cooperative, the Cooperative Bank of Quezon Province. The P100 million retail guaranty line is intended to protect the said cooperative bank should its existing housing loan accounts default in payment.

On top of this, there are several compelling directions that we need to take in order to ensure the viability and sustainability of housing cooperatives.

First, we have to ensure that the concept of cooperative housing is harmonized with our existing housing programs in the sector. It is important to have agreements to adapt the housing cooperative as a viable method of producing shelter, especially since they are already organized and could be made more capable through the key shelter agencies’ projects and programs.

The key shelter agencies shall pursue their capacity building activities to empower our housing cooperatives and fully equip the cooperative officers and members on the housing development process.

Second, our housing agencies should continue to make financing available to cooperatives if not through the regular programs, through a special loan window. In addition, we shall find a way to make the processing of requirements less stringent and more efficient and make it easier for housing cooperatives to engage in housing programs especially for socialized housing.

One area where we could collaborate is in the acquisition of land. We all know that the cost and availability of land, especially in urban centers, are both limiting factors in its acquisition, and it will be easier for communities, through cooperatives, to acquire the land rather than go about it individually. The support of an organized group such as a cooperative is invaluable because aside from the financing scheme available for organizations or communities, such as the community mortgage program of the social housing finance corporation, there are also other benefits. These include having other people to work with in processing requirements, among others. Di maipagkakaila na mas mabilis ang aksyon kapag nasa isang maayos na grupo kaysa kapag mag-isa ka lamang sa pag-asikaso ng iyong pabahay.

Finally, it is crucial that cooperatives continuously build on their strengths and conquer their weaknesses. It is a fact that some cooperatives break up because of mismanagement or disputes among officers and members, while others simply could not sustain their operations since members do not fulfill their obligations.

The partnership of cooperatives with the key shelter agencies could be made stronger if each party will play their important part. And that is, the public sector providing capacity building, technical assistance, and financing, while the cooperatives make sure that each member is responsible and vigilant in their housing project or program. I assure you that by doing this, the whole will become greater than the sum of all parts.