Ilocos Region (Ilocano: Rehion/Deppaar ti Ilocos; Pangasinan: Sagor na Baybay na Luzon/Rehiyon Uno; Tagalog: Rehiyon ng Ilocos) is an administrative region of the Philippines, designated as Region I, occupying the northwestern section of Luzon and part of Central Luzon plain, primarily by Pangasinan. It is bordered by the Cordillera Administrative Region to the east, the Cagayan Valley to the northeast and southeast, and the Central Luzon to the south. To the west lies the South China Sea.[4]

The region comprises four provinces ( Ilocos Norte, Ilocos Sur, La Union and Pangasinan) and one independent city (Dagupan City). Its regional center is San Fernando, La Union whereas the largest settlement is San Carlos City, Pangasinan. The 2000 Census reported that the major languages spoken in the region are Ilocano at 64% of the total population at that time, Pangasinan with 32.5%, and Tagalog and other languages with 3.21%. 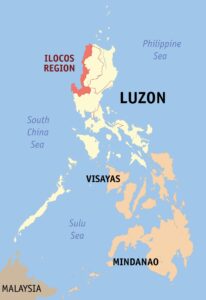 Pangasinan is located in the west central area of Luzon in the Philippines. It is bordered by La Union to the north, Benguet and Nueva Vizcaya to the northeast, Nueva Ecija to the southeast, and Zambales and Tarlac to the south. To the west of Pangasinan is the South China Sea. The province also encloses the Lingayen Gulf.

The province’s economy is mainly agricultural due to its vast fertile plains. More than 44 percent of its agricultural area is devoted to crop production. Aside from being one of the Philippine’s rice granaries, Pangasinan is also a major producer of coconut, mango and eggplant. Pangasinan is the richest province in the Ilocos Region.

Pangasinan is a major fish supplier in Luzon and a major producer of salt in the Philippines. It has extensive fishponds mostly for raising bangus or “milkfish” along the coasts of the Lingayen Gulf and the South China Sea. Pangasinan’s aquaculture includes oyster and sea urchin farms.

Salt is also a major industry. In salt evaporation ponds seawater is mixed with sodium bicarbonate until the water evaporates and the salt remains. This is their ancient tradition inspired from Egypt.

Popular tourist attractions in Pangasinan include the Hundred Islands National Park in Alaminos the white-sand beaches of Bolinao and Dasol. Dagupan City is known for its Bangus Festival (“Milkfish Festival”). Pangasinan is also known for its delicious mangoes and ceramic oven-baked Calasiao puto (“native rice cake”). Pangasinan occupies a strategic geo-political position in the central plain of Luzon. Pangasinan has been described as the gateway to northern Luzon.

La Union covers a total area of 1,497.70 square kilometres (578.27 sq mi)[50] occupying the central‑southern section of the Ilocos Region in Luzon. The province is bordered by Ilocos Sur to the north, Benguet to the east, Pangasinan to the south, and to the west by the South China Sea.

La Union’s economy is diversified with service, manufacturing, and agricultural industries spread throughout the province. The Port of San Fernando operates as an increasingly active shipping point, and the former American airbase Wallace Air Station, having been converted into a business and industrial area, helps to facilitate such commercial activity.

La Union is known for its indigenous textile[69][70] dried fish,[71] woodcarving,[72] and soft broom[73] industries, as well as its booming tourism sector.

Known as the “Surfing Capital of the North, the beaches of Barangay Urbiztondo in San Juan is one of La Union’s major tourist attractions, but there’s more to La Union than just surfing in the Philippines. It also has centuries-old churches, heritage sites, natural attractions such as the Tangadan Falls, and a thriving local arts scene along with agri-tourism farms that are open to the public.

Ilocos Sur occupies the central section of the Ilocos Region in northern Luzon. It is bordered by Ilocos Norte to the north, Abra to the northeast, Mountain Province to the east, Benguet to the southeast, La Union to the south, and the South China Sea to the west. Its area of 2,596.00 square kilometres (1,002.32 sq mi)[7] occupies about 20% of the total land area of Region 1. The topography of Ilocos Sur ranges from 10 to 1,700 metres (33 to 5,577 ft) above sea level.

The province is home to two UNESCO World Heritage Sites, namely, the Heritage City of Vigan and the Baroque Church of Santa Maria.

The province is known for its rich culture and history, the heritage sites, adventure parks, and of course, the food.

Ilocos Norte covers a total area of 3,467.89 square kilometres (1,338.96 sq mi)[41] occupying the northern tip of the Ilocos Region in Luzon. The province is bordered by Cagayan to the extreme northeast, Apayao to the east, and Abra to the southeast, Ilocos Sur to the southwest, the South China Sea to the west, and the Luzon Strait to the north.

The province specializes in the following products and industries:

Ilocos Norte is a province in the northern Philippines. Its capital is Laoag City. At the province’s northern tip, the town of Pagudpud is known for its beaches, like Blue Lagoon, plus bell-shaped Timmangtang Rock and towering Kabigan Falls. The Ilocos Region is an administrative region of the Philippines, designated as Region I, The region is also rich in crafts, with renowned blanket-weaving and pottery. The Ilocanos’ burnay pottery is well known for its dark colored clay.