“Unity and Integrity for Sustained Growth and Resiliency” 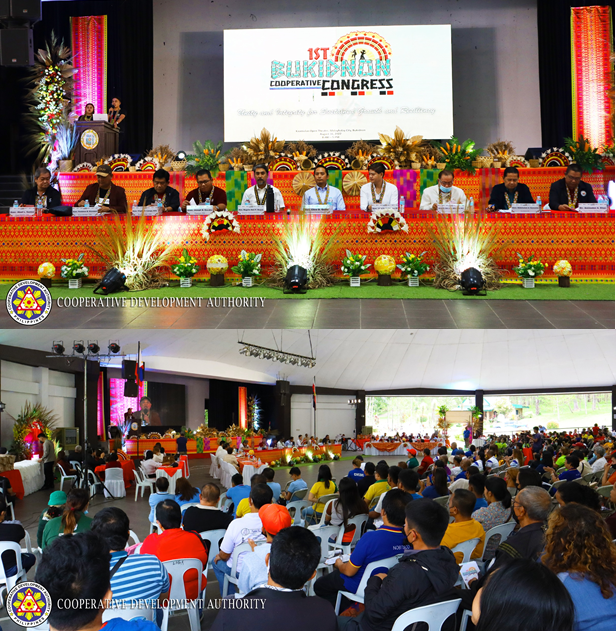 A great man once said, in words far beyond this writer’s meager capability to replicate, that “cooperativism puts power where it rightfully belongs, that is, with the people by harnessing their collective potentials.” The power of human collective potential is nothing to scoff at. Our history books are rife with examples of mankind’s great achievements when working together, when cooperating so to speak. Even the bible speaks of the Tower of Babel; a cautionary tale of humankind’s hubris to be sure but is nevertheless a testament to mankind’s unlimited potential. That if we work together; if we speak the same language, share the same wavelength, we could achieve almost anything. In this spirit, the cooperatives of Bukidnon gathered at the Kaamulan Folk Arts Theater on August 16, 2022 to conduct the Bukidnon Cooperative Congress with the theme “Unity and Integrity for Sustained Growth and Resiliency”. The said congress is the first major physical gathering of cooperatives in the province even amidst the Covid-19 pandemic and was welcomed with much enthusiasm but with precautionary measures. It was spearheaded by the Cooperative Union of Bukidnon in close coordination with the Bukidnon Government Employees Multi-Purpose Cooperative (BUGEMCO) and the Cooperative Development Authority. Keynote speakers include Governor Rogelio Neil P. Roque of the province of Bukidnon, Vice-Governor Clive D. Quiño also of the province of Bukidnon and no less than the Chairman of the Cooperative Development Authority, Undersecretary Joseph “Joy” B. Encabo. Also present were Assistant Secretaries: Abdul Salam A. Guinomla, Pendatun B. Disimban, Virgilio R. Lazaga M.D., Abad L. Santos, and Vidal D. Villanueva III.

After the usual preliminaries, the program began with a welcome address from the province’s Vice- Governor, Honorable Clive D. Quiño, followed by the presentation of the congress’ rationale by Assistant Secretary Abdul Salam A. Guinomla. Asec Guinomla concluded his presentation by thanking the local government for its strong support towards the cooperative sector in the province of Bukidnon. The presentation of the rationale was followed by the keynote address of Governor Rogelio Neil P. Roque who stressed the importance of unity and cooperation for cooperatives to prosper. He pointed out that it is in the best interest of the nation to have a prosperous cooperative sector, since cooperatives contribute to the nation’s employment generation and overall economy. He mentioned that the most prosperous countries in Asia, such as South Korea have a vibrant and successful cooperative sector. After his keynote address, the good governor presided over the oath-taking of the newly elected officers of the Cooperative Union of Bukidnon witnessed by CDA Chairman Joseph “Joy” B. Encabo, Vice Governor Clive D. Quino and the assembled assistant secretaries of the CDA.
The program proceeded with the solidarity messages given by the assistant secretaries cum board of directors of the Cooperative Development Authority. First to give his message was Asec Abdul Salam Guinomla who labelled cooperatives as formidable partners in the economic growth of the country. He stated that the board of directors were present in the occasion because they wish to bring the services of the agency to the provinces. He concluded by giving importance to the membership of cooperatives to cooperative unions as this fosters cooperation and ensures continued cooperative education. For his part, Asec Pendatun “Penny” B. Disimban thanked those responsible for the Cooperative Congress including Governor Roque and Vice-governor Quiño. He stressed the vitality of building inter-connectivity and partnership between cooperatives regardless of type, encouraging all those assembled to nurture the spirit of unity and cooperation. He concluded by assuring the continued support of the national government to cooperatives through the provision of continued ease of access to resources, technological innovations and capability enhancement for cooperative officers. Asec Virgilio R. Lazaga M.D. followed with his own solidarity message. Like an impassioned general, he addressed the assembled cooperatives as soldiers ready to fight the number 1 enemy of the state which is poverty and hunger. He stressed the importance of unity and partnership citing the existing partnerships the CDA has already built with its fellow government agencies such as PHilMech and the PCA. Asec. Lazaga’s message was followed by Asec. Abad L. Santos’ who proceeded to introduce the cooperative clusters headed by the CDA BOD, including his own public utilities cluster. He gave praise to Bukidnon’s own Bukidnon Transport Multi-purpose Cooperative (BUKTRAMCO) as a model transport cooperative. He also touched on electric cooperatives and their prospective registration with the Cooperative Development Authority. He concluded by encouraging associations, particularly those engaged in public utilities, to register as cooperatives so as to avail of grants, aids and other services from the government reserved only for cooperatives. He further encouraged transport cooperatives to modernize for the same reasons stated above. Asec. and Acting Administrator Myrla B. Paradillo also gave her own solidarity message albeit through video message and expressed her delight in witnessing the Bukidnon Cooperative Congress and pledged her support to the cooperative movement.
The biggest reception was reserved for Bukidnon’s own and pride Assistant Secretary Vidal D. Villanueva III. Speaking in the vernacular, he explained the purpose of the cooperative clusters and the plans of the CDA BOD to further improve the state of the cooperative movement in the Philippines. He updated the assembled cooperatives on the proposed establishment of a cooperative stabilization fund and the establishment of the Cooperative Academy of the Philippines which will ensure the continued education and capability building of cooperative leaders, officers and members. The CDA assistant secretary also encouraged all cooperatives to conduct massive recruitment drives, challenging them all to recruit the whole adult population of the province as members of their respective cooperatives. Asec. Vidal concluded by explaining MC 2020-23 which requires all cooperatives to become members of at least one cooperative union or federation. His message was met with tumultuous applause by the audience. To end the bevy of solidarity messages, Chairman Joseph “Joy” B. Encabo took the floor with his usual humility and joviality. He likened cooperatives to a lion’s pride which is stronger when united. “Alone I am weak but with others I am strong.”, he said, repeating a line from the Cooperative Pledge which the assembly knows by heart. The chairman also presented the Cooperative Development Authority’s thrust and priority programs for the year 2022, highlighting the agency’s accomplishments and future plans. He concluded by promising to prioritize the implementation of the 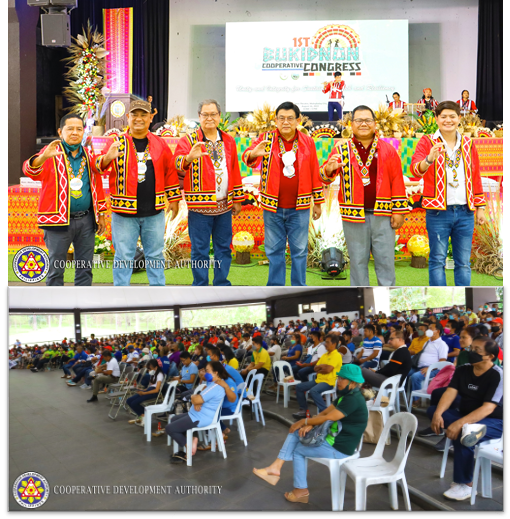 agency’s digitalization and wifi infrastructure projects particularly in the province of Bukidnon which is notoriously “internet-challenged”.
Chairman Richel R. Okit, CPA, MBA, REB, REA; the chairman of the Cooperative Union of Bukidnon gave his words of commitment following the message of Chairman Joseph “Joy” B. Encabo. He vowed that the CUB will work hard to live up to the challenge and to extend support to the Cooperative Development Authority’s plans and programs. The Bukidnon Cooperative Congress closed with a message from the CDA Region 10’s Regional Director, RD Aminoden A. Elias. He encouraged the Cooperative Union of Bukidnon to plant ideas and foster trust since they are handling funds from their member cooperatives. He hoped that the CUB would live up to this trust since it is not easily given. The Regional Director’s closing remarks was followed by an open forum facilitated by Sr. CDS Edwin B. Pelosas of Region 10 and attended by Chairman Joseph “Joy” B. Encabo and Asec Vidal Villanueva III. All questions were competently and satisfactorily answered by these luminaries in a manner characteristic of  the CDA’s desire to be accessible to the cooperatives which they serve.
On this note the 1st Bukidnon Cooperative Congress ended, leaving the assembled cooperatives suitably inspired and revitalized. The cooperative leaders who participated gleefully posed for photographs with the CDA BODs as well as the local government officials present, further presenting proof that the cooperative movement in the province is one big family. A family finally seeing each other physically for the first time after the worst of the pandemic which devastated the globe. The audience left the congress with renewed hope knowing that the cooperative movement is in good hands under the exemplary guidance of the active and responsive CDA Board of Directors.