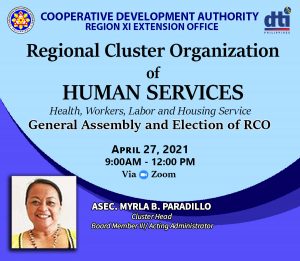 The Cooperative Development Authority Davao Region conducted the General Assembly Meeting and Election of Regional Clustered Organizations (RCOs) for Human Services Cluster last April 27, 2021 from 9:00 AM to 12:00 Noon via zoom platform. The participants are cooperative representatives under the Human Services Cluster which include Health, Housing, Workers, and Labor Service types of cooperatives.

The activity started with the Preliminaries- AVP for the Prayer, National Anthem, Cooperative Pledge and the House Rules. Ms. Doreen R. Catayoc, Sr. CDS of CPDAS Unit, acknowledged the participants under the finance cluster, the guests and CDA personnel. The Welcome Remarks and Objectives of the activity was given by CDA Davao Regional Director Elma R. Oguis. The Inspirational Message was given by ASec Myrla B. Paradillo, Member of the CDA Board of Administrators and Head of the Human Services Cluster. The Profile of Cooperatives in the Human Services Cluster was presented by Mr. Carlo Boji M. Nazareno, Sr. CDS, Regulatory Unit.

Supervising CDS Antonio C. Escobar presented the Procedural Guidelines in the Organization, Election and Recognition of National Alliance of Cooperatives (NAC), Sectoral APEX Organizations (SAOs), and Regional Clustered Organizations (RCOs) and the Procedural Guidelines in the Election of RCOs. Afterwhich, an Open Forum followed Asec. Myrla B. Paradillo and Dir. Elma R. Oguis as panelists. Immediately after, the election of officers followed with a breakout session for the election of representatives per province. The following officers are elected for the Human Services Cluster:

Asec. Myrla B. Paradillo administered the Oath Taking Ceremony of the Officers. Ms. Noemi A. Magabilen, Sr. CDS and Head of the Working Committee for RCO General Assembly and Election gave her Closing Remarks emphasizing on the functions of the officers of the cluster.