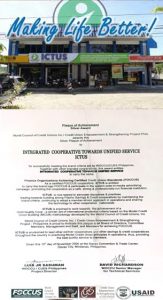 Twenty-three (23) years ago on October, 1997, Sta. Cruz Mission, Inc. which is a church-based missionary institution working with the Tbolis in the province of South Cotabato established Integrated Cooperative Toward Unified Service (ICTUS) through the efforts of 19 founding members and with an initial capital of P24, 500.00. The cooperative was conceived out of love for the poor and under privileged with the purpose of uplifting the quality of life and fostering missionary spirit. Integrated Cooperative Toward Unified Service (ICTUS) was officially registered with Cooperative Development Authority on May 8, 1998 with registration number RN-5440-DVO.

On the first year of the cooperative, the 19 members grew to 56 with only two (2) staff.

The growth of the cooperative started in 2003 when the cooperative passed the accreditation for technical assistance under USAID-Funded Credit Union Empowerment and Strengthening (CUES) in partnership with World Council of Credit Union (WOCCU) project based in Davao City, but its headquarters in Madison, Wisconsin. The project implemented the Model Credit Union Building (MCUB) methodology among savings and credit cooperative in Mindanao and Eastern Visayas. The MCUB focuses on six (6) financial disciplines which include: Delinquency control, provisioning, solvency, institutional capital, earning assets, and liquidity.

For more than 2 years, ICTUS labored to meet the standards for the 13 key ratios set by WOCCU-CUES. On June 2005, ICTUS passed the standards and was awarded and branded as Finance Organization achieving Certified Credit Union Standards (FOCCUS) cooperative in November 2005. It was the first award ever received by the cooperative and the first coop in South Cotabato to be given the brand. The brand assures members that ICTUS is a safe, stable and sustainable cooperative.

As a result, for the first time in less than a year, the coop not only doubled but tripled its assets to P 27 million by the end of 2005. Savings increase from P 4 million in the previous year to P 12 million. The WOCCU-CUES Project financed part of the coop’s renovation of its office as a consequence of getting the world-class status. It was for this reason, the cooperative also decided to automate its financial system, provided by MASS-SPECC Cooperative Development Center based in Cagayan de Oro City. Automation helped reduce errors and increase efficiency in the transaction and provide real-time financial statements. By the end of 2007, the cooperative had 29 full-time employees.

During this period, the cooperative was renamed ICTUS Premier Multipurpose Cooperative, in compliance with Republic Act 9520 or the Philippines Cooperative Code of 2008, all coops were required to register with the Cooperative Development Authority (CDA). The coop saw this as an opportunity to change its name but retain ICTUS. At this period, the cooperative invested in Automated Teller Machine (ATM) to cope up with advance technology and to be at par with other cooperatives. The ATM conveniently serves members’ withdrawals even after office hours.

In the efforts to bring the services closer to the members, many branches were added. Koronadal Branch (2008) and Tboli Branch (2010) were opened. 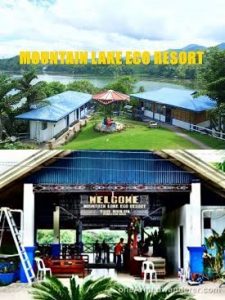 To diversify the coop operation, the cooperative acquired a property in Lake Sebu which was situated just beside the Lake. Through the feasibility study and learning visits to coops that operates a resort, the officers decided to invest in this type of tourism facility, Mountain Lake Eco Resort was born. Since its establishment, it has been a favorite place in Lake Sebu for Eco-Tourism purposes and venue workshops and other events. The resort employs 37 workers majority are Tboli Indigenous People (IP).

Because of its sound operations, ICTUS received various awards and recognitions: 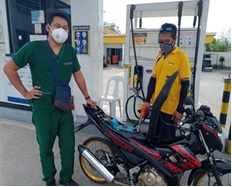 The coop grew so fast and it needed competent staff hence the coop invested heavily in training its management team to run the office efficiently.

To further expand coop’s reach, Tulunan branch in North Cotabato was opened on October 30, 2014. This brought the total branches of ICTUS to 15. After successful ATM operation in several of its branches, another ATM was opened in Calumpang, General Santos City in 2014. However, the machine was transferred in Banga, South Cotabato in 2015 because more members were observed to have ATM withdrawals in South Cotabato.

With diversification as a way to go for multipurpose coops, the officers and management decided to open two new ventures to complement its Savings and Credit and Resort operations. Towards the end of 2014, the coop opened its partnership with Sea Oil Philippines making ICTUS as their dealer. It also reopened its agricultural supply stores in Surallah, Sto. Nino, Norala, South Cotabato and Isulan, Sultan Kudarat.

The cooperative continued to receive accolades and citations form different agencies as a proof of its sterling performance, commitment and determination to continuously professionalize its operations. Among those citations were: 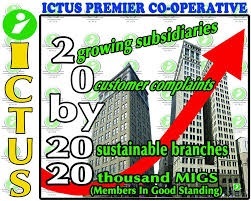 Through many years of dedicated service to thousands of its members ICTUS expand in the region, ICTUS has not lived up to the expectation of many. It also transformed communities. And as this coop intends to serve more, it needs to see clearly where it is going in the years to come. The coop developed its strategic direction through a 5-year Development Plan. The new direction of the cooperative is bannered 20by 2020. The coop retains its Tagline, “Making Life Better”, to remind itself of its mission.

The 20 by 2020 strategy would mean that the cooperative shall have:

Funeral Care as one subsidiary

INCREASE ASSET TO ONE BILLION PESOS