THE TRUE EMBODIMENT OF “SIPAG AT TIYAGA”

The City Food Terminal Multi-Purpose Cooperative (CFTEMCO) can be most illustrated as the proverbial grain of mustard seed, from a tiny, almost insignificant, smaller than all seeds into a flourishing and vibrant living entity that helps fuel the city’s economy through the fusion of agricultural productivity, commercial ingenuity and management proficiency.

Twenty-three years ago, the Central Public Market surrounding pedestrian gutters and sidewalks were occupied by transient and ambulant farmers and vendors selling their produce and wares. They were in discord with the market administration and they were constantly on the run from law and traffic enforcement authorities. However, in 1994, the ambulant vendors started their business in the nearby space which was the former Reyes Terminal later organized to Gensan Laray Vendors Association.

On September 16, 1996, the 64 pioneer members underwent Pre-Membership Education Seminar under Cooperative Development Authority and elected their first set of officers and finally, on September 20, 1996, the association was registered as Gensan Bagsakan Laray and Farmers Multi-Purpose . From 1996 to 1998, the cooperative was able to raise Eighty Thousand Pesos (P80, 000.00) as Share Capital out of the daily One (1) peso collection from its members. 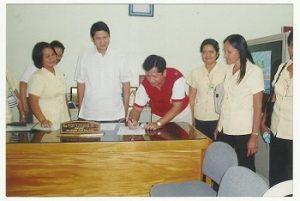 Accordingly, on January 15, 1998 the Sangguniang Panlungsod passed Resolution No. 12 s. 1998, segregating one hectare of the 2.7 hec. government property as the temporary “bagsakan” area for the cooperative.

The transfer of the cooperative to the said parcel of land was not easy considering that a huge amount shall be needed in putting up various structures such as stalls, office, restroom and other basic facilities and utilities.

In summary, the cooperative has a very unique business enterprise model which works well within the context of operation. For one, the cooperatives provide an enabling environment (both physical like the area and structures as well as financial in the form of provision of working capital and other loan services) for members to engage profitably in their wholesaling and retailing. Hence, directly helping in improving the lives of its members.

In addition, the cooperative also gives livelihood opportunities to tricycles, tricykad/padyak and drivers/operators in the Bagsakan Center who cater the transport needs of the consumers, farmers and traders as well.

Aside from that, the cooperative has also impacted the lives of other stakeholders in the community through the provision of other business and employment opportunities for them. Particularly, due to the economic activities in the Bagsakan center, Carenderia, Kapehan and other food related establishments have also proliferated to cater to the needs of the people in the area.Truly, the CFTEMCO has able to create a positive rippling effects not only to its members but also to different stakeholders in both the formal and informal sectors of the City of General Santos. Hence, worthy to be recognized and emulated by other people’s organizations

The cooperative started as a very small association and contributed only on a Piso-Pisoper day to generate initial capital and through patience, determination and spirit of “bayanihan”, the CFTEMCO now become a self-reliant multi-purpose cooperative which has a total of 325 members and counting with a total of 19 Million assets to date.