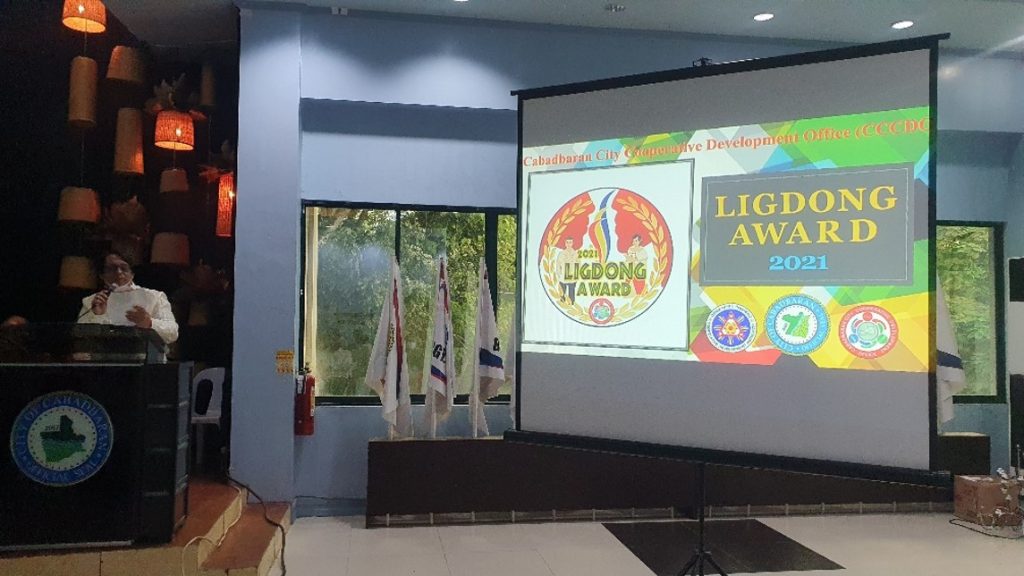 October 28, 2021/ Cabadbaran City – In a celebration full of joy and success, twelve (12) operating and active cooperatives, were spotlighted to shine. The City Cooperative Development Council initiated and spearheaded this program wherein cooperatives were given their due as awardees of the LIGDONG AWARDS, a program recognizing the exemplary performance of cooperatives, cooperative leaders and local government units in support to cooperative development work. The actual awarding program happened at the social hall of the People’s Government Center, City Hall Compound, Cabadbaran City, Agusan del Norte.

“Ligdong Award” is the first of its kind in the locality. There are four (4) Major awards and 11 Special awards given to cooperatives.

For the Major awards – 4 Outstanding Cooperatives were chosen, in four (4) categories – Large, Medium, Small and Micro. For the Special Awards – 4 coops in Growth and Expansion, 3 coops for Best in GAD Mainstreaming, 1coop for Best in Collaboration, and 3 Cooperative Leaders Awards. Participating cooperatives that did not qualify were not empty-handed since they were all given Certificates of Appreciation. 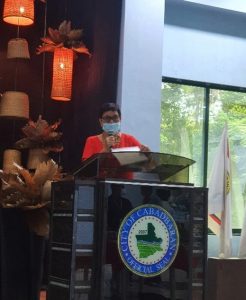 Ligdong Award is the local counterpart of Gawad Parangal which is CDA’s banner program which recognizes the performances of cooperatives in the field of service, development, environment and economic upliftment. However, Ligdong Award is fully the initiative of the cooperative council which the local government of Cabadbaran City has strong support. “Ligdong” is a Cebuano word which means integrity. Such that, Ligdong Award Program celebrates the positive values of honesty and transparency, diligence and hard-work as the foundation of the success of the concerned awardees. Thus, despite the pandemic, these cooperatives became champions and survived despite the odds. In line with the cooperative month celebration (every October of each year) which theme this year is….”Kooperatibang Matatag: Tumutugon Sa Mga Hamon, Daan Sa Pagbabangon, Nagbibigay Pag-asa Sa Makabagong Panahon!”, the program recognizing the effort of the cooperatives showing their being steady and strong despite the pandemic is very timely and inspiring. 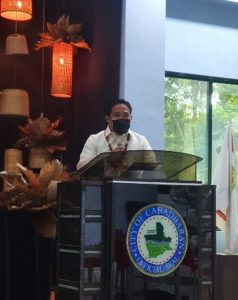 Hon. Councilor Joan P. Amonding, Chair of the Committee on Cooperatives, Community Organizations and Indigenous Peoples’ Concern, said that having this celebration is truly rewarding. “This is just a proof that our cooperatives are living the true spirit of cooperativism”, she added for emphasis.

The local government of Cabadbaran City sees the potential of cooperatives that they can become vehicles of sustainable and inclusive development. This was expressed by Engr. Louiel C. Bulang, the City Cooperative Development Officer, in his speech. He pointed out that the role of the LGU is only to extend technical, logistical and even financial assistance to cooperatives. In return, cooperatives have only to exhibit their full potential. Cabadbaran LGU had extended cash assistance to three (3) identified cooperatives – 1 transport coop and 2 micro-cooperatives. A total of One Million Pesos (P1M) cash were given to selected cooperatives. 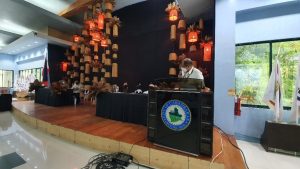 In his Closing Remarks, Vice Mayor Rey G. Jamboy assured the celebrating cooperatives that the local government will give support not only during cooperative month but all throughout the year. He is hopeful that these cooperatives which were granted financial assistance will be doing great and will make sure that the funds provided will be used for the betterment of the cooperative, in general; while improving the lives of the members in particular.