The 1987 Constitution, Article II Section 14 in the Declaration of Principles provides that “The State recognizes the role of women in nation-building and shall ensure the fundamental equality before the law of men and women.” This envisions a society that promotes gender equality and women’s empowerment.

Tabon Secondary Teachers and Employees Multi-Purpose Cooperative (TASETEMCO) was organized by 54 individuals, comes in proportionate number of men and women with diversified gender orientation. Back then, regardless of such, the only purpose of the cooperative is to augment the meager income of its members through provision of credit services. Later, the cooperative realized that the problem to be resolved is not only the economic needs of the members but also their social development. From then on, TASETEMCO in partnership with other organizations and stakeholders conducted and implemented various developmental programs not only for the members but also to various sectors in the community where it was directly involved. Some of which were as follows:

TASETEMCO’s aim to reform its members through capability trainings and gender development related activities incidentally enabled them to increase its membership.

They also advocated to build the youth, specifically the students from both secondary and primary level, to become the future coop advocates and successors by molding their minds to practice thrift and savings. They were also introduced to the beauty of cooperativism. As a result, the coop explored to have a laboratory coop.

The coop also wanted to bring its  impact to the community and to promote the coop sector to the public through the conduct of community related activities: Adopt-a-school program, tree planting, other environmental and community-related activities.
TASETEMCO being true to its mission went out of its way to promote social development. The cooperative coveted various awards and recognition both from the academe and from the cooperative sector for its community works.
Along with the vision to continue mainstreaming GAD in the cooperative, Tabon Secondary Teachers and Employees Multi-Purpose Cooperative (TASETEMCO) through its Gender and Development Committee formulated this Gender and Development Plan. 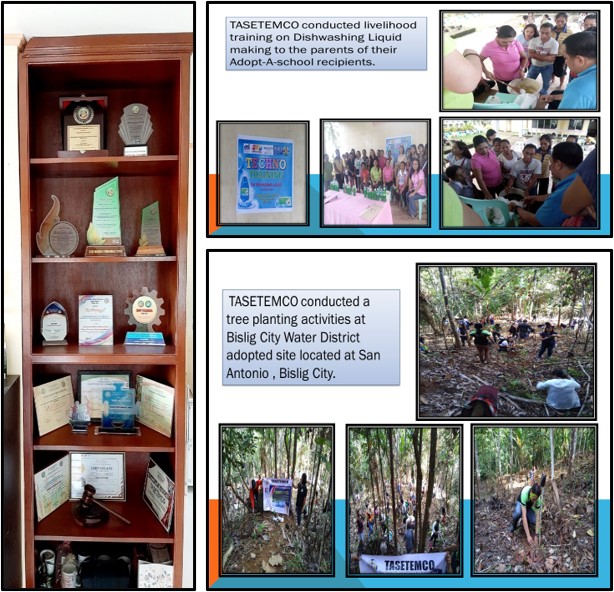 Through this, TASETEMCO believes that it will empower not only the cooperative members but also the community and with the provision of equal opportunity, everybody will be on its way in achieving the common goal which is PEACE. *******