Standing true and faithful to its mandate, the CDA CALABARZON Region is continuously strengthening partnerships with the national government agencies and local government units. When the RA 11535, An Act Making the Position of a Cooperative Development Officer Mandatory in the Municipal, City and Provincial Levels, was approved, its Field Cooperative Development Specialists never wasted an opportunity to spread the good news to the Local Chief Executives.

In the province of Rizal, the CDA Field Office, in partnership with the Rizal Provincial Cooperative Development Council, headed by Mr. Claro Ugay, gave the LCEs heads up even while the said law was just a Bill in early 2021. And with it already being a law, another round of visits to the LCEs were made by the team, and this time, the good Regional Director of CDA 4A, Dir. Pedro T. Defensor Jr. headed the visit.

On October 4, 2021 Dir. Defensor, with Field CDS Ms.Princess Anne Bulalayao, Mr. Ugay, and the MCDC Officers of Rodriguez, Rizal gave Hon. Dennis L. Hernandez a courtesy visit wherein the RA 11535 and other cooperative concerns were discussed.  The eager effort of the team fruited some remarkable milestones for the cooperatives – one was the serious consideration of the locality to having a Cooperative Development Officer and two, the conduct of a forum with the different government agencies with cooperative development programs. 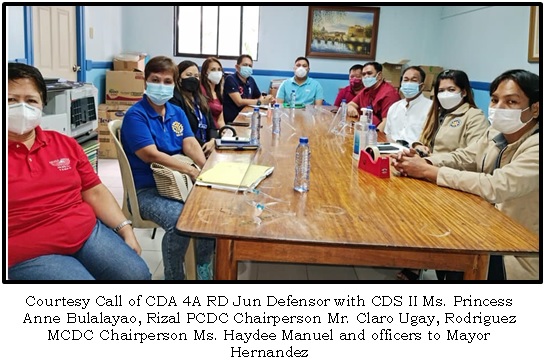 On October 22, 2021, the forum was conducted in the Municipal Gymnasium of Rodriguez, Rizal. The event was done in a blended manner, meaning some guests/facilitators graced the forum via Zoom platform, while the others were physically present in the said venue. 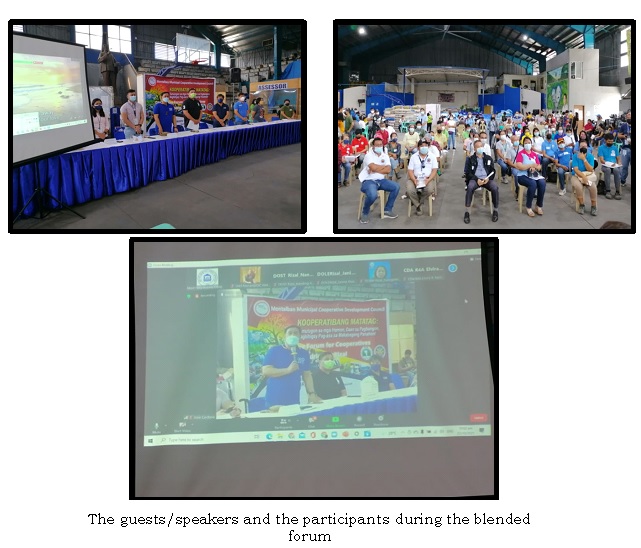 Honorable Mayor Dennis Fernandez, in his welcome remarks, acknowledged that the cooperatives in Rodriguez could be the channel of sustainable livelihood programs of their locality. He then thanked the representatives of the 20 cooperatives present and the various government agencies whom he hoped to be the beginning of partnerships and collaborations.

Before the presentations of the guest agencies, the CDA 4A was the first to tender their agency’s plans and programs given by Dir. Defensor. His presentation paved the way for the agencies to know more about the CDA and of how partnerships could possibly ignite remarkable projects that could help the people of Rodriguez economically. The good director particularly spoke about a target partnership with the LLDA that would establish livelihood projects along the coastline of Laguna Lake.

The CDA presentation was then followed by the other government agencies who discussed their plans and programs face to face or via Zoom. An open forum came after wherein all of the concerns raised were related to the transport sector as almost 90% of the cooperatives in Rodriguez were in transport operations. Based on the forum, the urgent concerns of the transport groups were the provision of the National Route Plan and also of the Local Public Transport Route Plan which was among the requirements of the banks before loan release and the consolidation of the transport group which was also taking a lot of time to be approved despite the hard work of the applying cooperatives. These concerns were taken upon by the concerned representatives and to be raised for discussion in their convergence meetings.

Although other government agencies also expressed their willingness to establish partnerships with the CDA and cooperatives for further development of the municipality of Rodriguez, it is apparent that there are still a lot of things to be done. The forum was just like pulling down a drawbridge going to a castle, and in order to go inside, brave soldiers have to face adversaries and be able to conquer them. The CDA, together with the cooperatives of Rodriguez, are steadfast for the goal ahead. Whatever comes in the journey, the team is geared up and determined to move past the trials. And with the other government agencies strengthening and supporting the sector, there is more confidence in their every step and there is no turning back. (By: Ms. Jeramel B. Valdez)