The Laguna Prime Multipurpose Cooperative (LPMPC) has grown tremendously in assets as well as membership since it was organized originally as the UP College of Agriculture Credit Cooperative Union, Inc. in 1961.  Much of the LPMPC strength and staying power is readily attributable to its faithfulness in upholding the ideals of cooperativism.

The LPMPC history and development maybe traced as far back in the late 1950s. And by way of its services and operation, LPMPC has magnified the service motivation underlying the cooperative concept.

On February 7, 1958, the UP College of Agriculture dean, Dr. Leopoldo B. Uichanco, received a letter suggesting the organization of a credit union to be composed of faculty members and employees of the college.  This letter came from Restituto Esguerra of the UPCA accounting office who cited the desirability of organizing and availing of the services of a credit cooperative for the constituents of the college.  The communication was passed on to the department of agricultural economics for study and recommendation, and which in turn, endorsed favorably the proposal on May 10 of the same year.  The endorsement however, pointed out the possibility of a competition between the cooperative and a rural bank being planned to be similarly established in the community at the same time.

After a protracted delay in organizing themselves, the interested parties finally met on April 4, 1961 through the leadership of ACCI director Nathaniel B. Tablante.  Thirty-seven (37) of the 60 faculty and employee-incorporators of the UP College of Agriculture (UPCA), the Agricultural Credit and Cooperative Institute (ACCI), and teachers of Makiling School, Inc. formally organized the UPCA Credit Cooperative Union, Inc.  One month later, on May 3, 1961, the cooperative received the approval of its registration and commenced its business operations.  The newly organized credit union was initially managed by a member of the board of directors who was designated as the manager-treasurer.  Towards the end of 1961, a part-time bookkeeper was hired.  By the end of 1963, the credit union had a complement of four full-time employees composed of a treasurer, bookkeeper, and assistant bookkeeper and a clerk.  The board of directors continued to manage the day-to-day operationsofthe cooperative.

The cooperative grew steadily from 173 members in 1961 to 4671 in 1989 and by that time the cooperative has been renamed as the U.P. at Los Baños Credit Cooperative Inc. (UPLBCCI).  While the growth and performance over the years has been consistent, it had also its share of ups and downs in its operations.  Membership between 1971 and 1972 dropped abruptly.  Likewise, the net savings dropped and the cooperative was inevitably forced to reduce the interest on fixed deposits to as low as 1.5 and 3.07 percent respectively for those years.  Many of the members signified their intention to resign from their membership in the union.

From a closed institutional cooperative, the UPLBCCI has now become a community-based cooperative.  In its early years, the membership came mostly from the staff of the research and educational institutions of the Los Baños Science Community until it expanded its membership base.  At present, membership includes self-employed persons, market vendors, jeepney and tricycle drivers as well as operators.  Along with this transformation, the cooperative widened its scope of business and social services to its members.  Hence, in the 1995 General Assembly, it was renamed as the UPLB Credit and Development Cooperative (UPLBCDC).  Thus, it has become a multipurpose cooperative.

The conscientious adherence to the ideals of cooperativism and sound management principles, the dynamic leadership which has been responsive to the needs not only of the members but also the community to which it belongs have contributed to the success of the erstwhile UPLB Credit Cooperative, Inc.  On November 15, 1995, it was adjudged as the MOST OUTSTANDING CREDIT COOPERATIVE of the Philippines during the National Cooperative month Celebration sponsored by the Cooperative Development Authority, Office of the President, Republic of the Philippines.

In 1994, the UPLBCCI acquired a 583 sq.m. lot worth P2.8 million at the Sacay Villas compound. The construction of a two-storey building at a cost of P3.8 million soon followed and was completed on January 31, 1996.  From its establishment in 1961, the cooperative had a two-room office at the Agricultural Credit and Cooperatives Institute (ACCI).  After 35 years of existence, it moved to the new building which was inaugurated on May 4, 1996.

Recognizing that the cooperative have expanded its membership to members outside of the UPLB community, the 2020 General Assembly approved the amendment of the Articles of Cooperation and By-laws of the Cooperative changing the name from “UPLB Credit and Development Cooperative” to “Laguna Prime Multipurpose Cooperative”.

Through the years, the Laguna Prime Multipurpose Cooperative has defined its vision as “a stable, progressive, committed and responsive cooperative rendering effective services towards the attainment of a high-quality life for its members and the community.” 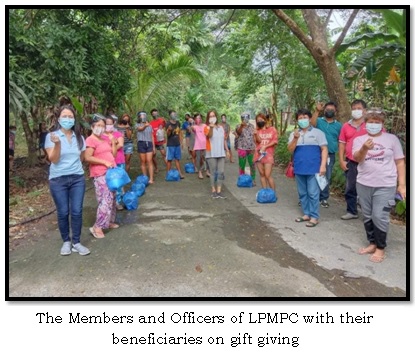 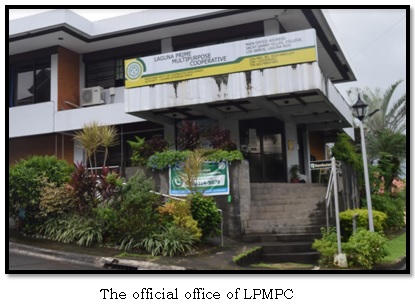