Right at the start of 2020, the CALABARZON, SUNPOWER EMPLOYEES MULTI-PURPOSE COOPERATIVE’s (SEMC) area of operation, was affected by the untimely eruption of Taal Volcano. The Board of Directors (BOD)then readily approved a budget that was used for the distribution of hygiene kits for the more than 100 Sunpower Philippines employees, either coop member or non-member who were directly affected by the eruption.

On the onset of the Covid-19 Pandemic, the SEMC BOD instantly and conscientiously acted upon to the needs of the members, considering in mind the adage: “Service Above Profit”.

Immediately, an announcement was released informing the members on the following:

Upon return to the office in May 18, 2020, the Board of Directors also provided grocery items to the coop’s six (6) management staff and the coop’s van was utilized as a shuttle service for coop management team’s incoming and outgoing logistics. The coop office and other coop areas were also re-layout to conform to the health protocols particularly social distancing. The gym, being non-operational, was converted to bazaar selling area.

On June 2020, one of the coop’s workers in the food stall met a bicycle accident and required a surgery. Coop members and even company executives pulled a “pass-the-hat” deed and were able to raise funds and donated it to the family to augment the operation expenses.

Sometime in August 2020, one of the coop staff manifested Covid-19 symptoms and tested positive in the swab testing. He was provided groceries and when his company-leaves were used up, the BOD approved the CovidPay (Php400.00 per day) while on quarantine period until he was given clearance to go back to work.

In August to September 2020, to further support the member-borrowers who are experiencing financial difficulty due to the situation, BOD resolved to offer Re-loan and Loan Restructuring to member-borrowers who wished to apply for such. Their loans were consolidated and the amortization period was extended.

Despite the pandemic, on October 2020, SEMC still celebrated its 14th Founding Anniversary. Highlight of the celebration was rewarding of the loyal members and staff with tenure of 10 and 5 years respectively. Timepiece of their choice were distributed and delivered to their respective homes. This gesture was made to entice and encourage members to continue their membership to the coop and patronage to its services.

The SEMC also distributed school supplies and face masks to the following schools:

On December 2020, one of the officers’ home was gutted by fire.The coop donated grocery and essential items to the family. Further on this same month, the coop distributed rice subsidy equivalent to 5 kilos (Php250.00) to all members and staff thru fund transfer to their respective payroll atm accounts.

Before the year 2020 ended, as a thank you gesture, the SEMC also gifted the SunPower Company’s frontliners (Security, Housekeeping/Maintenance, and Bazaar Teams) with Face Masks and groceries respectively.

It might have been a difficult time for the coop and our nation as a whole, but being an organization that values self-help and concern for community, SEMC managed to face all challenges and remained committed to offer services to the members and its community.

Together, we will all Heal as One! 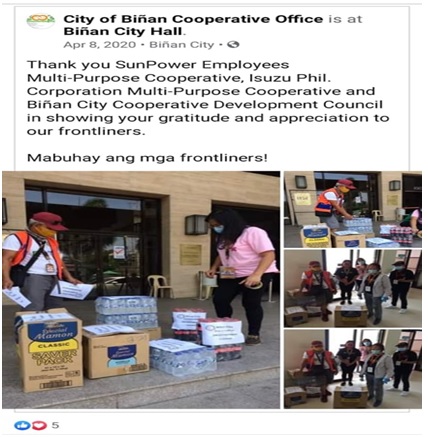