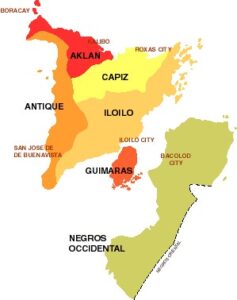 Region VI, also known as Western Visayas, is an administrative region of the Philippines that occupies the western portion of Visayas. It has a total land area of 12,828.97 sq km with borders including Sibuyan Sea on the north, Visayan Sea on the northeast, Guimaras strait on the east, Iloilo strait and Panay gulf on the south, and Sulu Sea on the west. The geography of the region is comprised of the major island of Panay, and a smaller island which is Guimaras. It is also comprised of the western half of Negros Island. It is made of six provinces, namely, Aklan, Antique, Capiz, Guimaras, Iloilo, and Negros Occidental. It also has two highly urbanized cities, that is, Bacolod and Iloilo City with the latter being the regional center. The region also consists of 14 component cities, 117 municipalities, and 4,051 barangays. In Western Visayas, the dialects that dominate are: Hiligaynon, Kinaray-a, Aklanon, and Capiznon.

Within Western Visayas, you can find wide stretches of coastal lowlands with rugged hills and mountains in the interior, along with rich volcanic soils. Due to the characteristics of the region’s lands, it is blessed with plenty of food sources, biodiversity, and a rich culture which natives and tourists alike can both appreciate. Among the things that Western Visayas is known for is the island of Boracay, which is a popular getaway destination, the antique houses and churches of Iloilo, the mango capital which is Guimaras, the seafood capital which Capiz is known for, and the sugarcane industry of Negros.