On August 18, 2021, the CDA Regional Office VIII fruitfully organized another meeting of the largest among the Regional Clustered Organizations, the Finance Cluster. 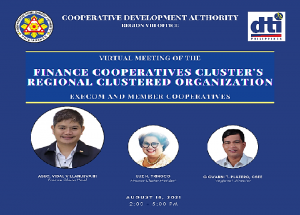 . This activity was held via Zoom platform and was participated by thirty-four (34) representatives from the member cooperatives, as well as some of our CDA Officials from the Head and Regional  Office VIII.

The new Regional Director of the CDA Region Office VIII, Mr. Giovanni T. Platero commenced the activity through his positive and warm welcoming message. As his first attendance to the meeting of the Finance Cooperative Cluster, he acknowledged ASEC. Vidal D. Villanueva, III for his constant guidance to the cooperatives in the region. He also shared some updates on the innovations in the office as part of the mechanisms in institutionalizing electronic government services. Likewise, he emphasized that the social media platform is now an important tool in helping cooperatives as they engage themselves in providing the Authority with the information useful in addressing their needs as well as in the crafting of corresponding policies and programs for the benefit of the cooperatives.

He continued to give updates on the concerns in the Finance Cooperatives Cluster which the activity sought to elevate to the top policy makers based on the needs of the cooperatives. Likewise, it was a venue for gathering concerns from the cooperatives being the consultative and coordinating body on matters affecting the cluster.

CDA Assistant Secretary Vidal D. Villanueva III, the overall Head of the Finance Cluster expressed his gratitude towards the ExeCom and Member Cooperatives for the levitation of their issues and concerns. He reported to the  cooperatives on the progress of those issues and concerns raised during the first meeting of the organized RCO Finance Cooperatives Cluster, as discussed with the CDA Board of Directors, mainly:

-Recommendations will be consulted from cooperative leaders all over the country and shall be collated for a harmonized policy on this matter.

– Knowing that there is a prohibition of our existing laws and circulars on primary cooperatives investing in other primary cooperatives as part of the Koop Kapatid Program, this matter is being studied now. The Legal team shall finish the process of getting recommendations from the cooperative leaders.

-The CDA Board has discussed this and the Legal Team has been studying it as well as presenting on this matter. The Congress suggested it might as well come up with an Amendment to the Philippine Deposit Insurance Corporation (PDIC) law, thereby incorporating cooperatives as part of the coverage of the PDIC.

-Guidelines for the extension of the deadline for the submission of the reportorial Requirements with the CDA until October 15, 2021 without penalty will be disseminated soon.

– The intention of this representation is to enable cooperatives to assist the Cooperative Members as well the Community. The Cooperative Board of Directors will have the discretion to come up with internal policy on how they will convert their accumulated CETF to CDF.

-The rationale behind this is for our RCO Representatives per Province to also get updates from the cooperative development councils in their respective provinces and cities. Likewise, for the cooperatives’ issues and concerns to be ventilated to the PCDC and CDC.

-This is to appeal before LBP, DBP and other Government Financial Institutions to have their interest rates lowered down so as not to be that oppressive for the cooperatives who availed loans from them.

-This is not totally prescribing how much is the interest rate, but establishing the ceiling or the minimum and maximum rate that the cooperative will impose to the loans and services that they extend to their members.

– The CDA has submitted its position paper/Legal opinion on this matter and asked assistance from the ARTA. Consequently, ARTA promised to direct and assist the Bureau of Internal Revenue (BIR) so that our cooperative members will no longer experience difficulty in securing their TIN and consequently the cooperative’s CTE.

ASEC. Vidal D. Villanueva III thanked the RCO Finance Cooperatives Cluster’s recommendations and concerns raised as these will certainly help the CDA Board of Directors produce sound policy recommendations that come up with a viable direction for the entire cooperative sector. It only proves the strength that we get from organizing RCOs and having consultations with its officials and member cooperatives. He further affirmed his commitment to work hand in hand with the RCO 8 Finance Cooperatives Cluster. 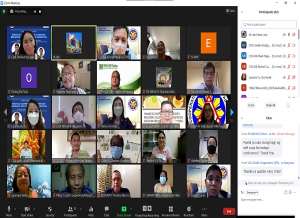 Ms. Luz H. Yringco, the RCO 8 Finance Cooperatives Cluster President, expressed her joy and appreciation as she perceives that the CDA indeed listens. According to her, concerns were acted upon promptly, and those aired by the cooperatives during the previous meetings were heard. As a result, all the meetings became productive. Likewise, the cooperative sector will have a lot of work to do in partnership with the CDA.

Other concerns raised during this meeting were (a) Coming up with a strategy to speed up processing of vehicle loan applications such as complying with the requirements of the banks, and the Fleet Management Training which the Transport cooperatives are required to undergo. They are hoping that this training will be available here in Region 8 as it is usually conducted in Manila; (b) Lowering down the interest rate, with consideration on balancing it with the new Memorandum Circular on Performance Audit Report (PAR) as financial ratios are ought to be sustained; (c) Gradual implementation of performance assessment with capacity building on Stability, Turn-Over Ratio, Efficiency, Profitability, and Structure of Assets (STEPS) as there is a need to look into its adaptability in times of pandemic; and, (d) Reducing requirements in transforming into Multipurpose Cooperative as cooperatives find preparation of feasibility a challenge. Dir. Platero assured to help the cooperatives’ concern starting with coming up with a template for the feasibility study that they can use. Further, Ms. Jornales affirmed that the Field Offices as well as the Region VIII Office is always open to assist the cooperatives. Conclusively, negotiations and assessments will be conducted by the CDA to help for these concerns to be addressed and to give ease to cooperatives.

The activity was concluded with a message from Mr. Nelson D. Bernardo, Vice-President of RCO 8 Finance Cooperatives’ Cluster expressing appreciation, recognition and support to the Finance Cluster Head, CDA Head Office and Region Eight (8) Officials as well as to the Finance Cooperatives’ Cluster whose dynamic participation made the meeting effective, constructive, and worthwhile.