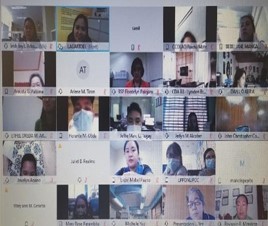 The Cooperative Development Authority Region VIII and Bangko Sentral Ng Pilipinas Tacloban  Branch  through the CDA Acting Regional Director Venus M. Jornales with  BSP Deputy Director Flordelyn T. Palejaro forged a partnership on the Know Your Money Webinar for cooperatives in the region. This is in pursuit of the BSP mandate in upholding the integrity of the Philippine currency, public information campaign (PIC) for various advocacy programs that are being conducted nationwide by BSP.

The scheduled series of webinars started at 1:30 pm and ended at 3:30 pm. The Acting Regional Director of the Cooperative Development Authority, Dir. Venus M. Jornales, welcomed the participants in the mentioned batches and extended gratitude for the partnership with the BSP Tacloban Branch.   The series of webinars was attended by 111 cooperatives with 174 participants who were mostly cash handlers, staff involved in financial transactions and officers. Presentation on the advocacy was discussed by Ms Erma L. Lagarto – Bank Officer II of BSP Tacloban.

Cooperatives were introduced to the enhanced set of banknotes & coins in circulation, raise the level of awareness of their distinct features and educate the public on the proper handling of our money. The objective is to protect the public against counterfeit currency and update its distinct features

The continuous conduct of the “Know your Money” (KYM) webinars   is to keep the public abreast particularly the cooperatives with the latest information about our Philippine Currency, despite the restrictions brought about by the pandemic.

The series of webinars ended with a closing message from Dir. Flordelyn T. Palejaro , the Acting Deputy Director of BSP Tacloban Branch. Dir. Palejaro, thanked the CDA and the cooperatives for their active participation in the advocacy of BSP.