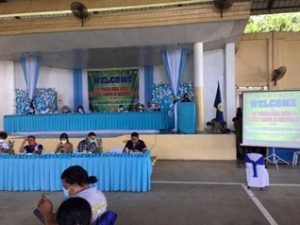 The Situational Awareness and Knowledge Management (SAKM) Cluster of the Eastern Visayas Regional Task Force to End the Local Communist Armed Conflict (RTF8-ELCAC) spearheaded this activity with the intention of facilitating their successful reintegration into the mainstream society through the whole-of-nation approach and assisting them in accessing government programs and projects. 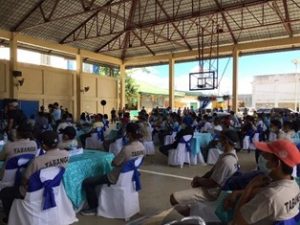 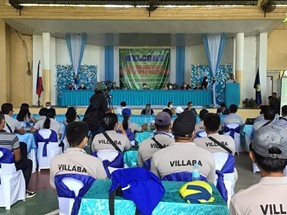 Former rebels in Leyte Province formed an association in order to face a new chapter in their lives. Around 191 members joined the general assembly. The members came from Jaro, Carigara, Leyte, Villaba, San Isidro, Calubian, Tabango, Kananga, Hilongos, Mahaplag, Baybay City and Ormoc City.  Among the highlights of the gathering were, signing of the manifesto, oath-taking of officers, presentation of issues and concerns of former rebels, and distribution of food packages.

Leyte Governor Leopoldo Dominico Petilla gave and handed P 30,000.00 cash assistance to the leader of the group Ka – Mayang as additional capital to their livelihood programs. Various government agencies and non-government organizations have committed to extend skills training, livelihood grants, and financial aids to the association.

Dir. Jornales in her speech advocated peacebuilders in reforming lives through cooperativism with the mandate of the Cooperative Development Authority as a proactive and responsive lead government agency for the promotion of sustained growth and  development of the Philippines cooperatives for them to become broad – based instruments of social justice, equity and balanced national progress. CDA supports Executive Order 70, Institutionalizing the Whole -of – Nation Approach in Attaining inclusive and sustainable peace, creating a National Task Force to End Local Communist Armed Conflict, and directing the adoption of a National Peace Framework. The CDA supports the voluntary organization and consensual development of activities that promotes cooperative movement like the FR associations in some of the areas in Region VIII by conducting Pre-Registration Seminar as the initial step in organizing and registering into a cooperative. CDA ensures provisions of technical assistance, and enables said cooperatives to develop into viable and responsive economic enterprises. Dir. Jornales shares the powers and functions of the Authority which are the following: Registration and regulation of cooperatives. Another is the developmental functions, wherein it formulates, adopts and implements integrated and comprehensive plans and programs with the national policy on cooperatives. Under this, the agency develops and conducts management and training programs that will provide members of cooperatives with entrepreneurial and managerial expertise, and technical skills required for the efficient operation of the cooperatives and inculcate them the true spirit of cooperativism.

Towards this end, Dir. Jornales committed the full support of CDA on this program of the government in harmonizing the peace and order between the government and the peacebuilders in accordance with the mandate of the President. The CDA is very willing to help them to normalize their lives away from the local communist armed conflict through the cooperativism approach.