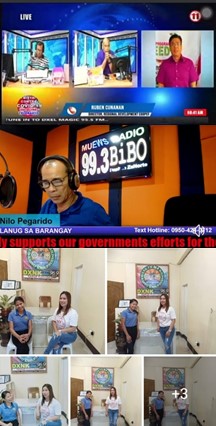 These media partners individually cover an entire province including neighboring provinces as far as Lanao del Norte, Lanao del Sur, Maguindanao and Cotabato. With such extensive coverage, it is expected that all 785 registered cooperatives scattered within the provinces of Zamboanga del Sur, Zamboanga Sibugay and Zamboanga del Norte were sufficiently informed.

The said radio broadcast with live fb streaming was scheduled at least once a day starting April 16 up to April 30, 2020, to ensure widest possible dissemination.

Regional Director Ruben L. Cunanan continues to encourage cooperative leaders to be updated and abreast through available channels, such as radio, facebook and cda website.