The Cordillera Administrative Region (CAR) was established on July 15, 1987 through executive Order No. 220 issued by President Corazon Aquino. It is the only land-locked region of the Philippines. The region consists of the provinces of Abra, Apayao, Benguet, Ifugao, Kalinga, and Mountain Province .The regional center is the Chartered City of Baguio, officially known as the Summer Capital of the Philippines. Its rugged terrain and breath-taking topography have been home to the sturdy and industrious indigenous tribes collectively called the Igorot, while its climate has bred an equally unique culture distinct from that of the country’s lowland colonized regions. It is located in the North-Central part of Luzon and encompasses most of the areas within the Cordillera Central mountain range of Luzon. It is bounded by Ilocos Norte and Cagayan in the North, Pangasinan and Nueva

Vizcaya in the South, Cagayan Valley 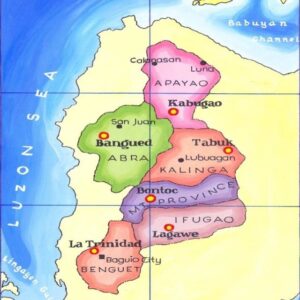 in the East, and the Ilocos Region in the West. It is the country’s only land-locked region. It has a mountainous topography and dubbed as the “Watershed Cradle of North Luzon” as it hosts nine major rivers that provide continuous water for irrigation and energy for Northern Luzon.

The region is rich in natural resources and has abundant mineral reserves. Gold, copper, silver, and zinc are among the metallic ores that can be

found in the region. Non-metallic reserves include sand, gravel, and sulfur. Although mineral reserves are found all over the region, mining is concentrated in Benguet. Majority of Cordillera’s population engage in farming and small-scale production.

Cordillera Administrative Region (CAR) is rich in ancient culture. It is the home of the indigenous tribe called the Igorot. The way of life of the people in this region existed way back to ancient Filipinos before the Spanish colonization. Cordillera also has various festivals, these includes the

Panagbenga or Baguio Flower Festival celebrated every February. The festival highlights are the flower exhibits, garden tours, floral competition, and parade of floats. Other festivals in the region include the Ulalim Festival in Kalinga, Lang-ay Festival in Mountain Province, Banaue Imbayah Festival, and the Tabuk Matagoan Festival.

Cordillera is one of the prime tourist destinations in the Philippines. It has many spectacular scenic views and enchantingly cool places. The world-famous Banaue Rice Terraces in the province of Ifugao is considered as the “Eighth Wonder of the World”. This structure of about 2000 to 6000 years old is a United Nations Organization for Education, Science and Culture (UNESCO) World Heritage Site. Other tourist attractions of the region include the Sumaguing Cave in Sagada and the mummy caves in Benguet and Mt. Province. There are four National Parks in the region: Cassamata Hill; Mount Pulag, which is the highest mountain in Luzon; Mount Data; and Balbalasang-Balbalan.

The Cordillera covers an area of approximately 18,294 square kilometers. It is composed of 73 municipalities, two cities, seven congressional districts, and 1,176 barangays.