As a sub-component of the Project, a Memorandum of Understanding between CDA CAR, IOL, Inc., and 14 pilot cooperatives in the Region were forged where the Advanced Robust Cooperative System (ARCS), an easy to use online platform for cooperatives’ accounting and membership data was pilot tested free of charge.  Said ARCS was funded by Department of Science and Technology Cordillera Administrative Region (DOST CAR) with the IOL, Inc.

Four (4) series of trainings were conducted to orient the cooperative representatives on the use and management of the system, and a tutorial class was also conducted with one of the pilot cooperatives for a better understanding on the mechanics of ARCS.

To encourage the commitment on the use of new technology and to resolve connectivity issue, the IOL, Inc represented by its Chief Executive Officer, Mr. Kevin Philip Gayao, and the Cooperative Development Authority represented by the Chairperson himself, USec. Joseph B. Encabo awarded 6 reconditioned laptops to the micro pilot cooperatives. 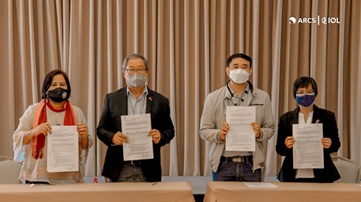 With the successful use of ARCS by the pilot cooperatives, the CDA CAR and IOL, Inc. conducted an orientation meeting last July 25, 2022 with the CAR Cooperative Union (CARCU) and the Cooperative Union of Baguio City and Luzon (CUBCL) for them assist in promoting digitalization in the cooperative movement.  – FRC