Philippine Standard Time:
Auxiliary Menu
You are here: AMCHC I RESPONDS TO THE CALL OF THE TIMES | CDA
LOCATION ADDRESS 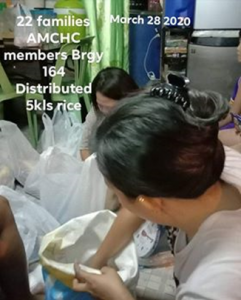 American actor, director and producer, Denzel Washington, has uttered these words which we ought to reflect on: “At the end, it’s not about what you have or even what you’ve accomplished. It’s about who you’ve lifted up, who you’ve made better. It’s about what you’ve given back.” One cooperative from Caloocan City who exemplified what it is to lift others up, make them better and give back, at a time when such acts are deeply needed, is the AMCHC I (Alyansa ng Mamamayan sa Caloocan Housing Cooperative I). The members of this cooperative volunteered in repacking rice and grocery items for the 36 scholars of the Mekung Foundation last March 17, 2020. Also, since the General Assembly of the cooperative was postponed due to COVID-19, the alcohol which were supposed to be used to disinfect the chairs for the said assembly were given to 45 coop members who were not able to buy any alcohol from the store.

They also distributed 5 kilos of rice last March 28 to 64 coop members from Bgy. 163 and Bgy. 164. The funds which were supposed to be used for the General Assembly were used instead to buy the 320 kilos of rice which they distributed. The BOD Vice-Chairperson (Rosky Anciro) of this cooperative also volunteered to deliver the food packs which came as a donation from different organizations. Ten (10) coop members also donated the amount of P 1,000 each for the said activity. To help the poorest of the poor coop members, the coop gave grocery items to 26 families last March 29. Medicines for high blood pressure and diabetes were also given to 5 coop members last April 5. All of these came from someone whom they consider as a good samaritan. Together, by God’s grace, we will win this battle against Covid-19. – FMC #CoopsAgainstCovid-19