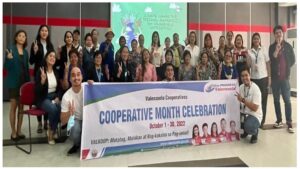 As part of the Cooperation Month Celebration, the Valenzuela CDC spearheaded by Valenzuela City Cooperative’s Committee on Environment, in coordination with Valenzuela CDO, conducted an activity on Climate Change Orientation.  This was held at the 3F Legislative Building, New City Hall, Audio Visual A, Valenzuela City, on October 7, 2022. The Orientation Speaker was Ms. Lasalette M. Gumban from NATCCO. She is currently completing the Trainers’ Manual on Co-ops for Climate Action, in partnership with the International Cooperative Alliance-Asia and the Pacific.

In attendance were twenty-two (22) cooperatives with thirty-three (33) members.

In the afternoon, which was the 2nd part of the Orientation, the Contest Mechanics on ValKoop in Action on Climate Change Criteria was discussed. These were as follows:  1.) Materials/Concept found within the coop office (25%). 2.) Originality (Uniqueness of the Concept or Innovation (25%).  3.) Effect on the environment (Will answer the environmental problems) (25%).  4.) Overall impact (ganda, galing, atbp. (25%).  Deadline of submission of entries is on the 2nd week of November 2022. Contest winners will be announced on December 2022 during the quarterly meeting of Valenzuela CDC.

Orientation participants were happy to have learned so much and made aware about Climate Change and how to make positive responses that would make life sustainable. They also enjoyed the free lunch.