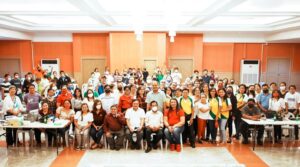 The CSF orientation was presented and discussed by Sr. CDS Sergio E. Herrero, Jr. of the CDA NCR, while the team CSF of the CDA Head Office, represented by Ms. Josie Villaver and Ms. Leonie Memoracion, and team CSF of the CDA-NCR, CDS Marietta Bagundang, were ever ready to address and answer questions during the open forum.

Raffle prizes were given to lucky winners and token of appreciation were distributed to all who have attended the event, thru the generosity and kindness of the Mandaluyong Multi-Purpose Cooperative. It was indeed a very fruitful and meaningful endeavor to all the cooperatives in the City of Mandaluyong.