The COOPERATIVE DEVELOPMENT AUTHORITY CENTRAL OFFICE (CDA-CO) Disposal Committee will receive sealed bids until November 17, 2017, 10:00A.M. at the Administrative Division-General Services Section, 827 Aurora Boulevard, service Road, Brgy. Immaculate Conception, Cubao, Quezon City for the sale of the following unserviceable properties on an “As is Where is” basis: 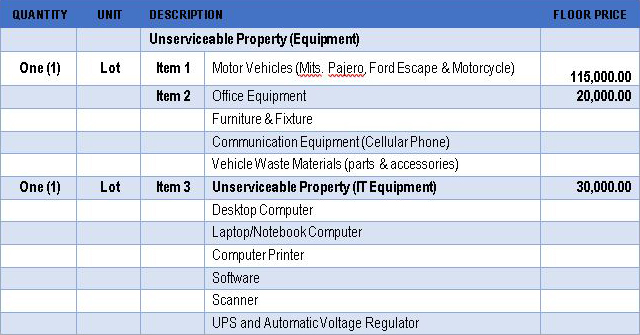 THE CDA DISPOSAL COMMITTEE RESERVES THE RIGHT TO REJECT ANY OR ALL SUBMITTED BIDS TO WAIVE ANY DEFICIENCIES FOUND THEREIN, AND TO ACCEPT SUCH BIDS AS MAY BE CONSIDERED MOST ADVANTAGEOUS TO THE CDA.