This was spearheaded by the cluster head on Human Services, CDA Director ASec Myrla B. Paradillo.

Out of the registered twenty seven (27) labor/worker coops in Region XI that were invited to the activity, twenty-five (25) cooperatives attended. They consisted of forty-five (45) participants, including three (3) guests from Pagadian City.

The salient features of RA 11364, especially the constitution of the CDA Board of Directors, the importance of influential sectoral APEX organizations and the creation of a National Alliance of Cooperatives (NAC) were discussed by ASec Paradillo. She stressed that there is a need to strengthen the labor and service sector to gain a voice in the public sphere. She also revealed that by the end of March 2020, no federation/union may represent more than one cluster. Therefore, from now until then, existing federations/unions will be mandated to choose the cluster they wish to belong to, the choice is dependent on certain factors to be determined by the CDA.

The second speaker was the Executive Director of the Union of Legitimate Service Contracting Cooperatives (ULSCC), Mr. Vergel Hilario. Mr. Hilario presented updates on Labor laws and the Security of Tenure Bill, which was vetoed by President Duterte last 2019. He shared that the Bill made endo and contractualization illegal and discussed points that supported the vetoing of the Bill. Thereafter, Mr. Hilario encouraged the participants to join ULSCC. 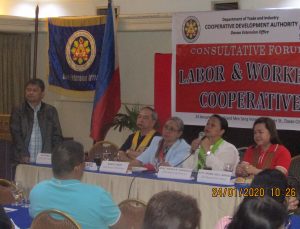