‘Heroes are not always in the frontline; most are at the back silently supporting the main actors.’

It all started in the Month of March this year—the Month advocates the “Fire Prevention Program”.

Who would have thought that the madlang people would not only be suffering from the possible rage of blazing accidental fires but also be terrified from the spread of an invisible enemy, the infectious Corona Virus Disease 2019 most commonly known as COVID-19 Plandemic. What was then expected to be a manageable disease unexpectedly turned out to be a global health crisis causing an alarming socio-economic crisis caused by lockdowns, shutdowns, and quarantine protocols.

The World Health Organization (WHO) announced the COVID-19 outbreak as a pandemic on March 11, 2020. Beforehand, the Philippine President, Rodrigo Roa Duterte signed the Proclamation No. 922 “Declaring a State of Public Health Emergency Throughout the Philippines” on March 8, 2020 due to the increasing number of Covid cases in the country. During the public health emergency meetings, reports would cause some areas in the National Capital Region to be put under community quarantine lockdowns. Thereon, eventually included all the provinces, cities and municipalities, down to several barangays. 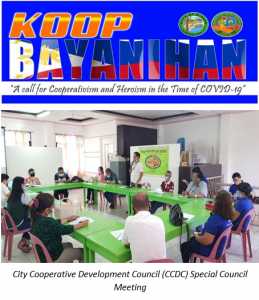 Consequently, Republic Act 11469 known as “Bayanihan to Heal As One Act” was signed on March 24, 2020. This act was the government’s response to address the need of the suffering public amidst the pandemic. This law did not only provide emergency assistance, such as, the basic necessities—food, water, clothing, shelter and financial assistance. The Act also ensures that no unscrupulous individuals would take advantage of the situation and enrich themselves at the expense of the public during this time of crisis.

With this Act, the government agencies and partner-NGOs, civil societies were mandated to provide programs and services that  will help mitigate the spread of the virus. Also, the private sectors were encouraged to extend support on the government’s action against COVID-19 pandemic. Suggestively, the budget to be used by these agencies and sectors will be drawn-out from the unused budget and realignment of programs since scheduled activities were also greatly affected. In the cooperatives, the community fund and optional fund are the sources of these emergency assistance.

The cooperative sector of Bislig heeded the call of the government to help  Bislig community in the nation’s battle against the dreaded COVID-19 virus.

The City Cooperative Development Council (CCDC) launched the KOOP BAYANIHAN, a relief operations project to help Bisliganons who have been drastically affected by Covid –the council distributed basic commodities to communities and Personal Protective Equipment (PPEs) to the city’s frontliners, along with food provision.

Cooperatives from various categories: micro, small, medium and large; came together to showcase the values that has nurtured the cooperative sector – “service, equity and compassion”. Initially, CCDC had pooled a total of Two Hundred Sixty Thousand and Five Hundred Pesos (P260,500.00) cash pledges to jumpstart the noteworthy cause. 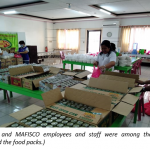 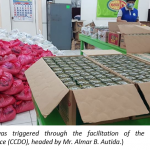 Funds collected for the program was sourced-out from the cooperative’s Community Development Fund (CDF), Optional Fund and General Fund. Altruistic individuals also took part by giving their share in the said program.

The sector targeted more than 1,000 beneficiaries to receive food packs, giving priority to those who are from the vulnerable, marginalized and informal sector in the community within the months of April and May. The dispersal of food packs was carried through “clusters” via identified cooperatives that will serve as the official distribution centers in the different areas. On the lead were: Mangagoy Fishermen Cooperative Multipurpose Cooperative (MAFISCO), Tabon Secondary Teachers Multipurpose Cooperative (TASETEMCO), Andres Soriano Memorial Hospital Cooperative (ASMHC) and Bislig Community and Government Employees MPC (BCGEMCO). Transportation services during the distribution process was made possible by JODAB Transport Services Multi-purpose Cooperative making sure that the goods would reached their destination hassle-free. 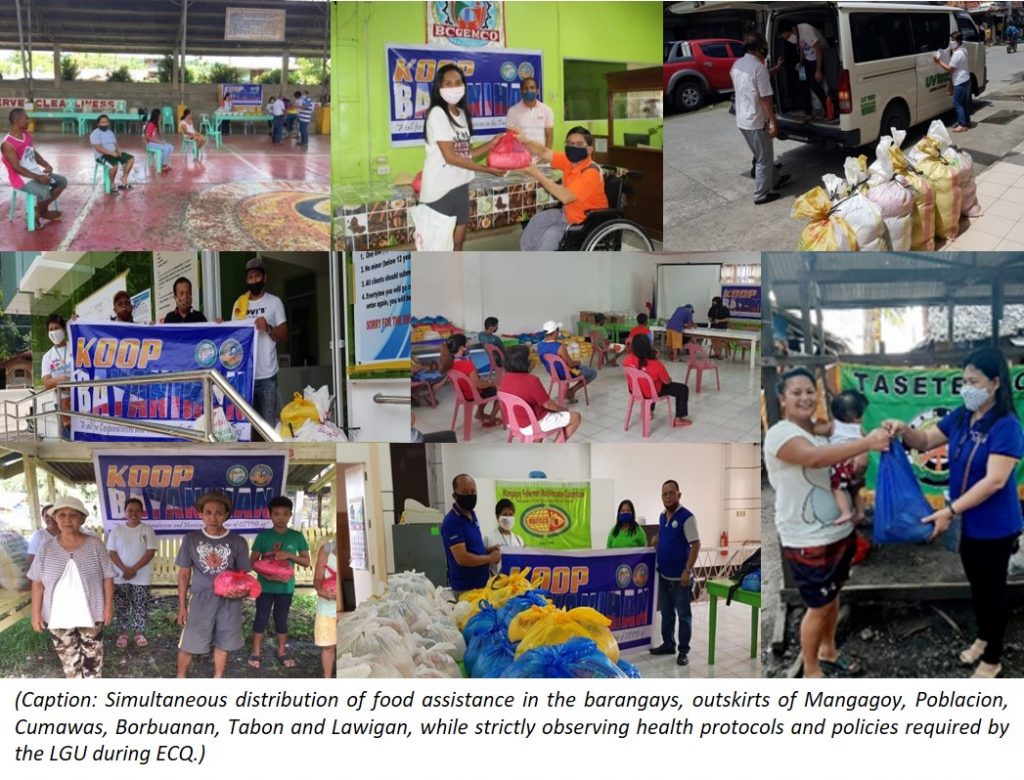 The second wave of distribution was made on the month of September 2020. The council turned-over 550 face-shields and 20 gallons of alcohol to the Local Government Unit of Bislig as support- assistance to the city’s frontliners; to ensure that health protocols are being observed.

This only shows that cooperatives also served as “backliners” or the side-support of the government.  Cooperatives may not be in the frontline, but they composed the “force” standing behind the main actors (the government) in this Bayanihan activities. This also proves that in cooperativism there is strength.The coop sector is an anchor in time of uncertainties, like this pandemic.

Cooperatives remain steadfast in their commitment to provide the much needed service to its members and the community amidst the crisis. Backliners is the serious force that would ensure that the government succeeds on this arduous battle. Working together, living up to the spirit of cooperativism, and showcasing that truly, this cooperative strength is a countervailing force against this pandemic. ******