Five decades ago, a group of 21 forestry-based employees from UPCF, ERDB and FPRDI bonded together to form what is now popularly known as the MAKILING FORESTRY CREDIT COOPERATIVE (MFCC).

The highest motivation was to free themselves from the influence of loan sharks who were then controlling the credit line for most of the employees in need of financial aid. Their goal was to create an organization that could educate them on how to save and how to make wise use of credit. In other words, they wanted to learn how to manage their finances to provide them added income and better quality of life.

On February 10, 1958, the Articles of Incorporation and By-laws of the Makiling Forestry Cooperative Credit Union, Inc. (MFCCUI) were adopted. It was submitted to the Cooperatives Administration Office on March 27, 1958, for registration and on April 30, 1958, the MFCCUI was born.

Members of the first Credit Committee were Rosario Cortes, Calixto Mabesa and Feliciano Lauricio. Those of the Supervisory Committee were Lucio Quimbo, Jose Orozco and Rodrigo Valbuena.

The turning point was in 1963 with the promulgation of the policy on maximum loan equal to 4 times the Fixed Deposits. This policy resulted in 100% increase in Fixed Deposits in 1963 and significant increases thereafter.

New leadership from 1963 to 1965 spearheaded by Mamerto Garcia, Agustin Ramos, Jr., Arsenio Tongacan, Feliciano Lauricio, Isidro Zamuco, and Felix Eusebio raked in a total increase in Fixed Deposits, assets and gross savings about 4 times that of 1962.

The new ideas and the dynamic leadership of these officers steadily propelled the cooperative to progress which meant a steady increase in membership; substantial capital build-up; more income and higher dividends for the members.

In 1974, all cooperatives were required under P.D. 175 and L.O.I No. 23, to re-register with the Bureau of Cooperatives Development of the Department of Local Government and Community Development. Likewise, all members had to undergo the pre-membership education seminar.

On February 21, 1975, the cooperative was re-registered as MAKILING FORESTRY CREDIT COOPERATIVE, INC. (MFCCI), with Registration No. FF-005RR. Significantly, MFCCI was the 1st re-registered credit cooperative in the entire country, the first four registrants being other types of cooperatives.

In 1977, the Bureau of Cooperatives Development mandated all cooperatives to revise its Articles of Incorporation and By-laws. Some salient revisions were: (1) change of name to MAKILING FORESTRY KILUSANG BAYAN FOR CREDIT, INC. (MFKBCI); (2) increase in the Board of Directors to 7 members (3) creation of Election Committee of 3; (4) President and Vice President was changed to Chairman and Vice-Chairman; (5) the KB Guarantee Fund was established; and (6) annual general assembly formerly based on the calendar year was changed to Fiscal Year ending November 30.

The year 1977 was best remembered as the “Bonanza-of-Dividends” year with the distribution of the highest dividend rate since 1958; 8.5% for interest on Savings Deposits, 10.45% for Fixed Deposits and 5% for Patronage Refund. By 1977, the cooperative garnered 307 members already.

It was in 1980 also when delinquency was given a major role in the operations of the cooperative by suspending, for a period, any member who had been delinquent for more than 2 months. Should the delinquency extend to 6 months, the member was automatically expelled. This policy had been one of our best policies for the controlled percentage of delinquencies the cooperative has at present.

In 1982, the maximum loans were increased to P6,000 payable in 20 months or P10,000 payable in 15 months at 12 % interest per annum despite MLGCD Circular No. 80-13 authorizing an interest rate of 17 %. Likewise, all temporary and casual employees may borrow an amount equal to their Fixed and Savings Deposits.

This increase in assets and income was partly due to the loan obtained from the Cooperative Development Loan Fund (CDLF) in the amount of P100,000. Another P400,000-loan was obtained in 1985 which was paid in full by 1987.

By the year 1986, dividends of 16% on Savings Deposits, 18% on Fixed Deposits and 5% Patronage Refund were given out. That year, more than P6 Million went in and out of the credit union coffers. Loan applications processed were 545 that generated a gross savings of more than ½ million pesos.

In 1986, the maximum amount of loan was P20,000 for regular loan and P20,000 for special loan payable in 20 months. Mutual Aid Fund contribution for deceased member was set at P25 per member.

In 1988, the Board also passed a resolution granting the casual and contractual employees special loans payable on a term co-terminus with their appointments.

In 1994, the maximum regular loan was again increased to P50,000. The term of payment was 24 months, except for jeep loan which was payable in 30 months.

Of the P39.5M loans granted by the cooperative, 22.4% went to 36 members for the construction of houses and apartments, acquisition of lots and purchase of brand-new cars in the total amount of P9.4M. In addition to this, P6.4M loan was granted for house repairs and improvement.

Productive loans were likewise given to increase family income such as: Business purposes-P16.9M, Agricultural endeavors- P5.08M; and Purchase/repair of jeeps-P6.73M.

Other providential purposes granted were: Educational-P3.8M; Medical/Dental- P8.24M; and purchase of appliances, lends money to relatives/friends and payment of obligations-P7.5M.

The year 2001 had been the peak of operations in terms of gross savings when our cooperative earned the unprecedented amount of P22.45M on a total asset of P127.93M. The dividends given that year are as follows: Interest on shares-21%; interest on fixed deposits-21%, interest on Savings Deposits-17% and Patronage Refund-14.5%.

What is LRF? It is a fund set up for the payment of the theoretical balance of Regular, Special and Housing loans so covered by said fund.

As of 2008, LRF fund has a balance of P2.91M. A total of P1.4M had been paid out for the loans of deceased members so covered by the LRF fund. Loans of members from whose full payment shall not go beyond age 75 may be covered by the LRF. After age 65, LRF coverage is optional.

Another benefit comes from the Mutual Aid Fund (MAF). It was started in 1980 by giving the family of a deceased member the amount of P200. From then on the benefits gradually increased. In 1997 said MAF was increased to P60 per member-contributor provided the deceased member is not delinquent for more than 2 months.

From 2008 to 2020 the MAF gives a benefit of P100 per member-contributor or approximately P51,000 provided a deceased member is not delinquent for more than 2 months. For qualified dependents, the member is given P10,000 MAF.

Aside from the Mutual Aid Fund, the cooperative also extends medical assistance to members and their immediate family in the amount of P5,000 & P3,000, respectively. For 2020, 10 members and 8 dependents were given assistance. The condition for all the benefits given is that the member must be in good standing meaning not delinquent in the payment of loans.

Members aged 64 and under are enrolled in Fortune Life Insurance for death benefits and those 65 and over who cannot be covered by insurance are funded by our cooperative.

Since then, the spirit of cooperativism works in MFCC as shown by its growth from 2008 to 2020 as follows: financial growth 134M  to 268M; membership 558 to 575, business development (loans) 99M to 179M, community involvements such as tree planting and creek cleaning, donations to various underprivileged groups/organizations, scholarship programs, livelihood projects among others).

The MFCC in its 64 years of existence is continuously moving forward to a stronger Cooperative “MFCC Matatag, Nagkakisa at Patuloy sa Pagsulong ng Kaunlaran ng mga kasapi at komunidad” 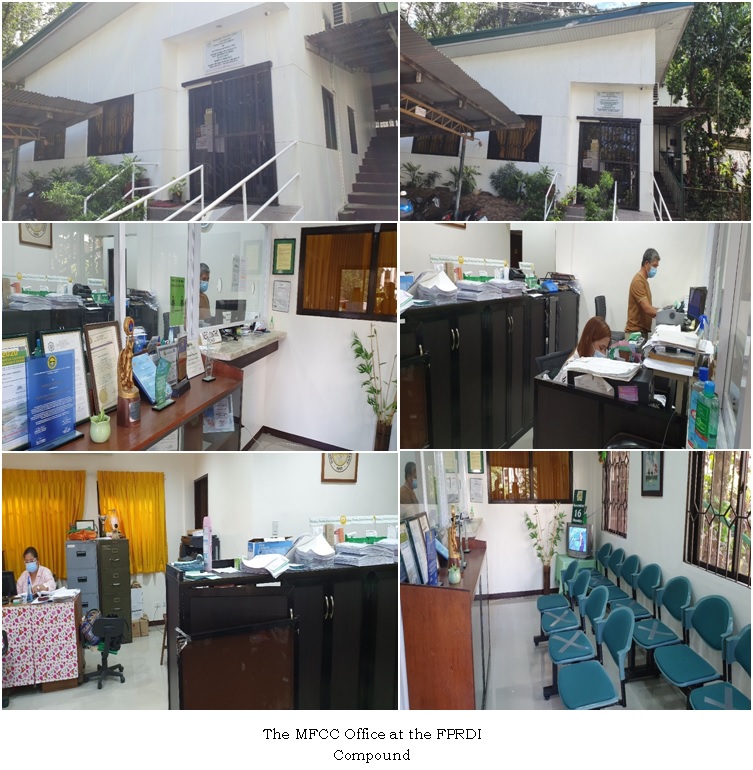