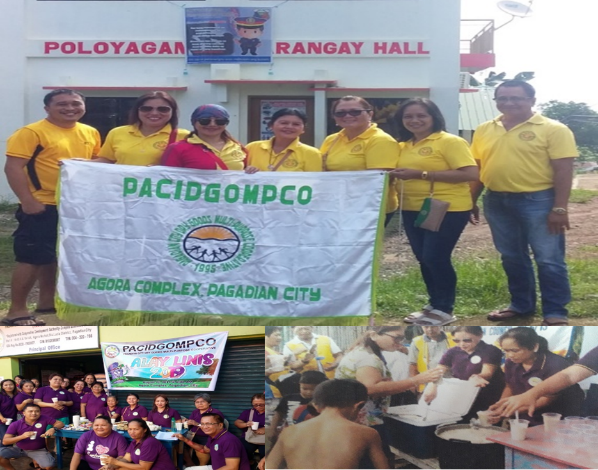 Prior to year 1992, market vendors in the city of Pagadian enjoyed unlimited freedom to do their trade within the old public market. Such stability was however threatened when in 1992, the new agora public market was erected and with it, some rules set out to ensure order within the market.

Then market superintendent, Mr. Gualberto Simon required all businessmen with similar trade/business to form an association with a caveat that those who will not comply will not be granted lease to operate.

On July 27, 1992, thirty-six (36) dry goods vendors acceded to the mandate and elected their first set of officers. However, during the awarding of the lease, only 10 association members were awarded. Despite the commitment to give them preference on the next batch of awardees, 21 members withdrew their membership from the association.

Notwithstanding the decline in number, the association decided to contribute for initial capital of Thousand Pesos (Php 1,000.00) each to be used for lending activity at Two percent (2%) interest rate per month.

Gradually, the members came to appreciate the easy and convenient financial access provided by the association, so they decided to increase their operating capital and applied for Financial Assistance with the Department of Trade and Industry (DTI) ZDS Provincial Office.

While disheartened when the application was denied for lack of legal personality, they used it as opportunity to work for and secured their registration with the Securities and Exchange Commission (SEC), on August 18, 1993, with the assistance of Ms. Marichu Atay and Mr. Editho Lumacang of the Department of Trade and Industry (DTI).

A year later, the SEC required the submission of Annual Report which included the certification as to the registration of their business with the Bureau of Internal Revenue (BIR). Unfortunately, such certification required them to pay 3% tax from Gross Income, to their utter dismay, since they were expecting the association to be amongst the exempt entities under the National Internal Revenue Code.

Subsequently, they were allowed Loan Assistance by the DTI amounting to a total of Two Million Three Hundred Thousand Pesos (Php2,300,000.00) at twelve percent (12%) per annum. With diligence, determination and perseverance, the 19 persistent cooperators were able to fully pay such huge debt on maturity date.

With such huge influx of capital, careful management, strong governance and loyal support from the city government, the cooperative flourished into a beacon of sustainability. They became a silent partner of the city government in ensuring sustainable and holistic development among market vendors in the city.

In year 2011, they opened their doors for individuals outside the market to join their growing family. As of 2019, their total membership reached up to 90 enterprising Filipino cooperators and still growing.

Beginning year 2011, they gradually succeeded in mainstreaming Gender and Development not only in their social development programs but also in all services affecting coop members.

While the cooperative has truly achieved remarkable feats through the years, its officers exhibited strength in character and profound concern for the welfare of its members by providing immediate response during the most trying times.

The aftermath of the AMAN Scam in 2012 proved devastating to majority of the members who innocently invested their hard-earned money for the said quick money scheme. Such losses threatened the collapse of the members’ businesses for lack of capital to support its daily operation. Fortunately, the officers immediately addressed the crisis by providing 90 days grace period to pay their loan amortization and condoned the penalty for missed payments incurred after the lapse of said grace period.

Another devastation hit the public market when a destructive fire caught the place ablaze and affected 16 coop members and many other stall owners. The cooperative readily provided loan assistance at zero interest with only minimal service fee plus no penalty for missed payments within the maximum duration of 1 year. The said initiative helped those members recover financially, restored and sustained their business operation.

As they continue to grow, they made conscious efforts to meet the needs they saw outside of their circle by pursuing social services such as:

Through the years, the cooperative grew alongside their individual businesses and employed 3 regular employees and 2 contractual employees paid in accordance with the wage order issued by the Department of Labor and Employment with social benefits such as SSS, Philhealth and Pag-Ibig. The coop also supported the government by acting as withholding agent for the Bureau of Internal Revenue.

LIVING THEIR DREAMS. The officers and members alike continue enjoying their equitable share in the patronage refund and interest on capital distributed yearly from their se  lf-sustaining business operations (lending, consumers and boarding house) – operating solely from the accumulated sum of members’ paid-up share capital.

As of 2019, the coop reported total volume of business in the amount of Php46M, with gross sales of more than Php4M and total assets of Php33.8M which includes a newly acquired 2-storey building worth Php10.5M, which housed their lending and boarding house operation.

DREAMING ON. After careful study, the cooperative is now working on the approved expansion of their consumer operation by opening a branch in brgy. Danlugan, Pagadian City within the year 2020.

Like ants conquering every storm together, the once struggling market vendors now thriving and proud entrepreneurs proved that success may come from unexpected places or least likely people through perseverance, hard work and cooperation.