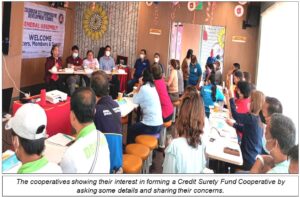 The Credit Surety Fund (CSF) Orientation was held last July 14, 2022 at McDonald’s Tandang Sora Branch, Crossroads Business Park, Brgy. Sangandaan, Quezon City. The CDA-CSF Team from the Head Office led by Atty. Frederick Joe Robles, Acting Director of the CSF Department, motivated the cooperatives by sharing inspiring stories. He pointed out how the perseverance of Mr. Manny Villar, Jr. transformed his life from rags to riches and the resourcefulness of Mr. John Gokongwei, Jr. made them billionaires. Also, he said that getting a loan from banks is okay as long as the loan proceeds will be used to buy assets and not liabilities.

Mr. Sergio Herrero, Jr., Senior CDS for CSF Division from CDA-NCREO, was the one who discussed the features of a CSF Cooperative. He talked how beneficial it is since CSF members can avail of loans from lending banks without hard collateral through the Surety Agreement which is to be issued by the CSF Cooperative as protection for such loans. Issues on the Return on Investment (ROI) and roles of the cooperative and LGUs were raised afterwards. The participants were assured that even though the ROI is not that big, one of the main objectives of the CSF Cooperative is to help SMEs have more funds for relending to members. Cooperative members, on the other hand, can also avail of loans individually with their respective cooperatives as guarantors. The LGUs will play a big role as they will give a counterpart which is equivalent to the total contribution of the cooperatives. In the end, Mr. Herrero expressed his hope for Caloocan City to be the next one to register a CSF Cooperative. Thru the collaborative efforts of different cooperatives, NGOs, LGUs, GFIs and GAs, the ultimate goal of creating the CSF Cooperative is very much attainable.