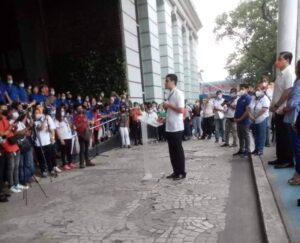 Presidential Proclamation No. 493 series of 2003 declared the month of October 2004 and every year thereafter as Cooperative Month, and mandated the entire cooperative movement nationwide to annually celebrate cooperative month every October. In line with this, Pasig City key players in the cooperative movement, together with the coop sector, celebrated Pasig Coop Month Kick off on October 3, 2022.

Among the many programs lined up for the Coop Month was the Flag Raising Ceremony with the City Government of Pasig, which was part of the Coop Month Kick off activity. It was held at the Pasig Quadrangle at around 7: 00 a.m. The City Mayor, Hon. Vico Sotto gave his message to the Pasig cooperatives. It was then followed by a Thanks Giving Mass officiated by Rev. Fr. Joseph D. Santos at the 5th Floor Chapel, Pasig City Hall around 9:00 o’clock in the morning. The activity was participated by Ninety-Three (93) Pasig cooperatives members.