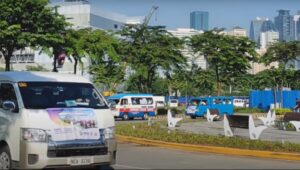 To ensure the safe and smooth flow of the motorcade, the organizers coordinated the activity to the Pasig Traffic Engineering Division (TED), and Pasig City Rescue Team. It was followed by a short program with the Committee on Cooperatives Chairperson, Coun. Pao Santiago, gracing the occasion and energetically participating in the program.  He also gave his message to the Pasig City cooperatives. The activity was attended by 145 cooperative members.